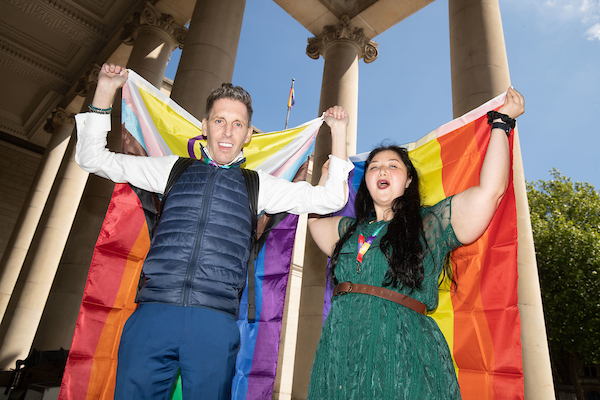 Stephen Donovan and Susanna Pilny, Co-Chairs of Bank of Ireland’s With Pride employee network, are pictured at the raising of the Pride and Trans flags above the Bank’s College Green building in Dublin.

8 June 2022 – Bank of Ireland has raised the Pride and Trans flags above its College Green building in the centre of Dublin to mark the beginning of Pride Month.

Francesca McDonagh, Bank of Ireland Group Chief Executive, said: “It’s almost four decades since the first Dublin Pride Parade in 1983 and much has changed in intervening years. While Pride is a celebration of the LGBTQ+ community and an opportunity to reflect on just how far we have come, it grew from political activism and the fight for safety, equality, and respect. The tragic events of this year are a stark reminder, if any were needed, that that fight continues.”

“It is important that Bank of Ireland, as an employer and a part of the community, makes a strong and visible show of support for LGBTQ+ people. Raising the Pride and Trans flags above College Green, a building that is so synonymous with Bank of Ireland, is our way of saying ‘we see you – we support you – and you belong.”

The Bank also announced today that it will fund a new eLearning initiative by Belong To, the national LGBTQ+ youth organisation, for volunteers across the country who work with young people. The six-part course has been designed to give volunteers the skills, language and tools to be inclusive, welcoming and understanding of the needs of lesbian, gay, bisexual, trans and queer (LGBTQ+) young people.

Bank of Ireland’s Begin Together fund continues to support charities and not-for profit organisations working with the LGBTQ+ community. Recent projects supported include: