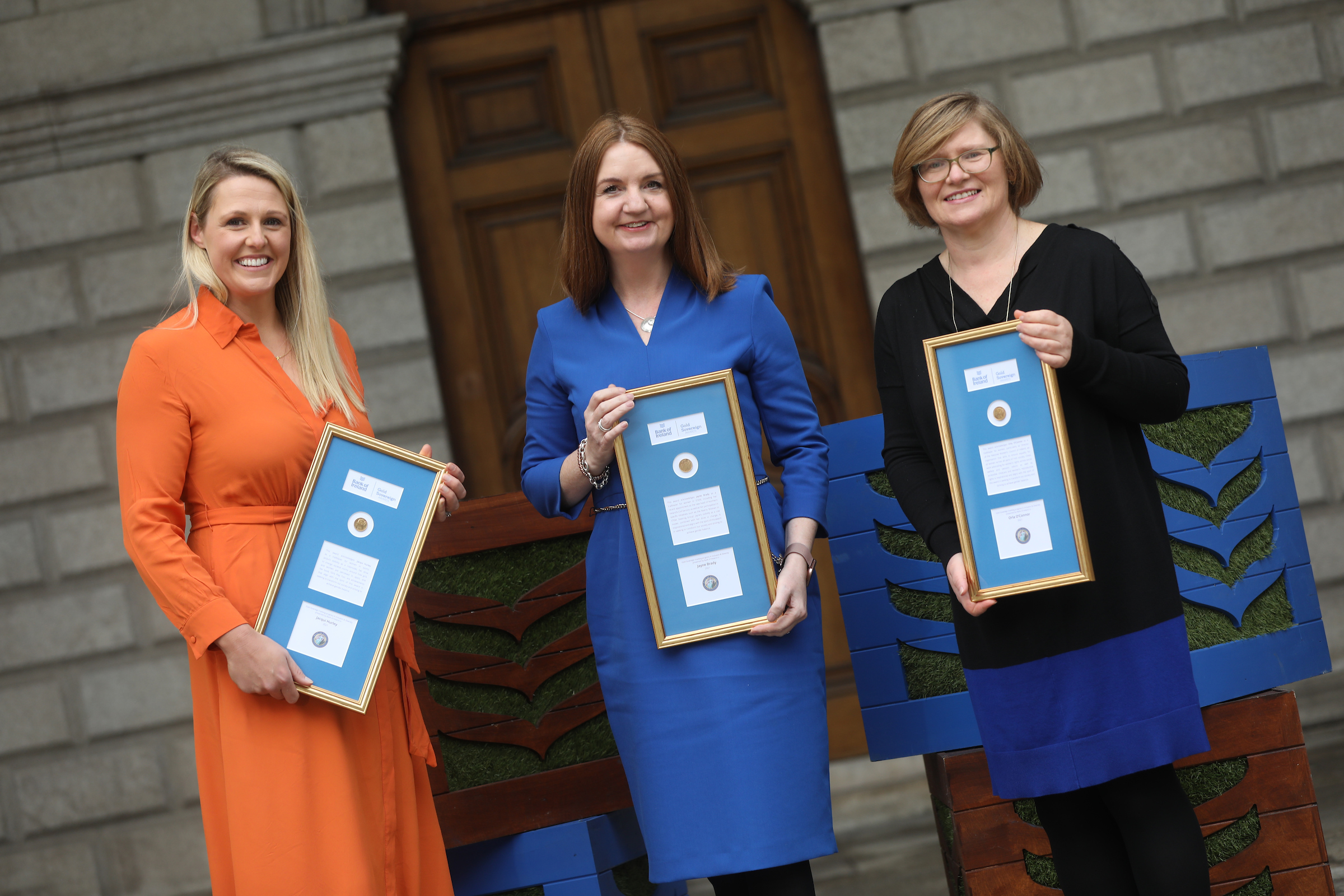 Pictured from left to right are Jacqui Hurley, Jayne Brady and Orla O’Connor.

Bank of Ireland has announced the latest recipients of its Gold Sovereign Award for leaders in society who are promoting Inclusion and Diversity.

Each of the Awardees has been recognised for their individual contributions to transforming our society and striving to achieve gender balance in their respective fields.

The gold sovereign is symbolic for Bank of Ireland. In the past, employees getting married were gifted a gold sovereign. However, for women getting married during the ‘marriage bar’, from 1932 to 1973, this also signaled the end to their professional career. In recent years, the sovereigns have been repurposed and are now used to recognise outstanding achievement and leadership in the promotion of Inclusion and Diversity, either through awardees’ chosen career or by advocating for the cause.

“Championing inclusion is something we work hard at every day in Bank of Ireland. A more diverse company, in all its forms, will better reflect the diversity of our customer base and the communities in which we live and work. That’s why we have set ourselves ambitious targets to achieve gender balance in management and leadership positions. We are making progress but have more to do.

“Around the world, we see long-established, hard-won rights for women under threat. At the same time, the global pandemic has exacerbated existing inequalities between women and men in almost all areas of life. The Gold Sovereign is a powerful symbol to recognise those who, like our three Awardees today, are showing leadership and championing diversity in business, sport, advocacy and public life”.

An external panel of international and Irish business leaders have independently identified and nominated the 2021 awardees. The awarding panel is made up of Paul Flynn and Deirdre Gavin, Bank of Ireland, Carol Andrews, BNY Mellon, Margot Slattery, Sodexo, Alastair Blair, Accenture.

Previous recipients of the Gold Sovereign Award include Dame Helena Morrissey who is founder of the 30% Club, campaigner Vicky Phelan and Dee Forbes of RTÉ.

Orla O’Connor has been awarded for her pioneering work, advocating for women, particularly as Director of the National Women’s Council of Ireland, an organisation that aims to ensure equality for all women across all parts of Irish society. Orla’s inspirational work advocating for women’s rights across social welfare pension reform as well as accessible childcare and women’s reproductive rights aligns with the spirit of this award in seeking to transform our society and striving to achieve gender balance.

Jayne Brady has been recognised as an outstanding role model for women in STEM. This award acknowledges Jayne’s own success, including her recent appointment as the new head of Northern Ireland’s Civil Service, as well as her participation in specific initiatives such as the Matrix ‘Women in STEM Steering Group’. Jayne’s visibility as a role model as well as her drive to change aligns with the spirit of the Gold Sovereign awards.

Jacqui Hurley’s Gold Sovereign award acknowledges her role as trailblazer for women in sports, both competitively and in the media as an RTÉ sports anchor and presenter, on our screens for the last 15 years. She is also author of the book ‘Girls Play Too’. Her visibility as a role model and her drive to change societal norms around how girls and women in sport are perceived is inspirational to young girls and women in sport, and beyond.

Orla O’Connor is Director of National Women’s Council (NWC), the leading national women’s membership organisation in Ireland, with over 190-member groups. She was Co-Director of Together For Yes, the national Civil Society Campaign to remove the 8th Amendment in the referendum.
Orla is a feminist, and an expert in the policies needed to progress women’s equality in Ireland. Orla has led numerous high level, successful campaigns on a wide range of issues on women’s rights, including social welfare reform, pension reform and for the introduction of quality and affordable childcare. Orla is passionate about ensuring access to women’s reproductive rights; about ensuring more women are in leadership positions; about ending violence against women; and increasing women’s economic equality.

Born in Cork, Jacqui Hurley has represented Ireland in basketball and played camogie for Cork. In 2009, she became the first-ever female anchor of Sunday Sport on RTÉ Radio 1. She presents the daily sports bulletins and is also a regular anchor of RTÉ’s soccer coverage. She has also been involved in producing a number of sports themed documentaries for the station including ‘Skin in the Game’ in 2013 and ‘Pairc Life’ in 2015. In 2020, Jacqui released her first book titled, ‘Girls Play Too’, honouring the achievements of past Irish female athletes.

In 2021 Jayne Brady was appointed Head of the Civil Service, in Northern Ireland. She is an engineer with extensive, board experience and a track record of success that transcends blue-chip corporations, start-ups and funding ecosystems.
Jayne is currently Digital Innovation Commissioner within Belfast City Council and Chair of the Digital Pillar of the Belfast Region City Deal investment program. She has also recently been appointed to UK Government’s Innovation Expert Group and is an Entrepreneurial Expert for the Said Business School at Oxford University. She is deeply committed to delivering economic and social development through harnessing innovation and was recently recognised for services to the economy with both an MBE and honorary doctorate.