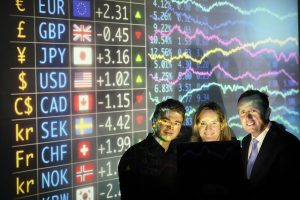 Marco Stango, a first year Engineering student from Trinity College Dublin has been announced overall winner of Bank of Ireland’s FX Trade Off for 2017. The competition, which saw 500 third level students participate, was established to encourage participation and knowledge of global FX markets among third level students. Bank of Ireland teamed up with Irish Fintech, Share Navigator who provided the simulated markets environment for competition entrants.

This was the first year of the FX Trade Off which has proven very popular for budding markets professionals. The competition received over 1,000 entries – more than three times the initial allocation of places – with four launch nights in UCD, TCD, DCU and UCC extremely well attended. The competition saw over 22,000 trades, with the US Dollar against the Japanese Yen the most traded currency pair.

Marco can look forward to a series of mentoring workshops from the Bank of Ireland Global Markets senior leadership team, work experience in the largest dealing room in Ireland, €1,000 cash and an iPad. Meanwhile, two UCD students, Tom Walsh and Matthew Collins were placed in second and third place respectively and will also benefit from mentoring workshops, cash prizes and iPads.

Kevin Twomey, CEO of Bank of Ireland Global Markets, said “This is the first year of our FX Trade-Off competition and we have been overwhelmed with not only the volume of interest and entries but also the positive feedback from participants and Universities. Providing first-hand experience to students and offering mentoring from our senior team members will offer real value as students embark into the next stages of their professional life. We are particularly pleased that the entrants represented a cross-section of courses including the arts, economics and engineering.

“In Bank of Ireland Global Markets we have a strong track record of retaining graduates, with over a quarter of our colleagues originating through the graduate programme. We look forward to expanding the competition reach in 2018”

Martha O’Hagan Luff Assistant Professor, Business & Administrative Studies, Trinity College Dublin said; “We are delighted to be part of the inaugural Bank of Ireland FX Trading competition, over 80 students from Trinity alone took part in competition. At Trinity, we are committed to supporting our students as they prepare for life after they finish University. The FX Trading competition was extremely well received by the students who took part and I want to congratulate Marco on his success.”

For the full list of winners and helpful links to FX Trade Off tutorials please visit:
FX Trade Off