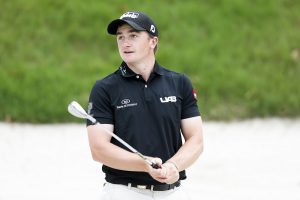 Bank of Ireland has announced a two year sponsorship deal with Irish professional golfer Paul Dunne, which runs to March 2018. This announcement highlights the Bank’s strengthening commitment to Irish golf given its current sponsorship deal with Shane Lowry and its official sponsorship of the European Tour’s Dubai Duty Free Irish Open over the next three years. Paul will represent Bank of Ireland as an Ambassador at golfing tournaments in Ireland and internationally. Bank of Ireland’s logo will appear on the right chest of Paul’s golfing apparel, and he will also make appearances at events for the Bank.

Paul burst onto the radar when, as an amateur, he shared the lead heading into the final round of the 2015 Open Championship at St. Andrews, and also set a tournament record for the lowest 54-hole score by an amateur. Later last year, the Wicklow native again showed his potential when he shared the first-round lead in the Alfred Dunhill Links Championship, eventually finishing tied 19th. Newly professional, Paul recently came through all three stages of the European Tour Qualifying School, earning full playing rights for 2016.

Speaking about the sponsorship, Tom Hayes, CEO, Bank of Ireland Corporate Banking, said “We are delighted and proud to be supporting Paul Dunne, who is an incredibly talented young golfer. His track record as an amateur has been exceptional and we are excited to be supporting him as he starts his professional journey. Paul’s immense ambition, drive, and focus have all contributed to making him one of the best new golfing talents to emerge in recent years and these qualities make him a perfect fit for Ireland’s leading Bank. We are very much looking forward to a great partnership with Paul as he competes both at home and abroad.”

Paul Dunne (23) added: “Having Bank of Ireland on board as a sponsor is a fantastic boost to the start of my professional golfing career. The Bank has a strong tradition in supporting the best and brightest sporting talent across a number of disciplines and I’m honoured to be joining their team of Ambassadors. I look forward to representing them to the best of my ability as I compete on a global stage with the highest ranked golfers in the world.”