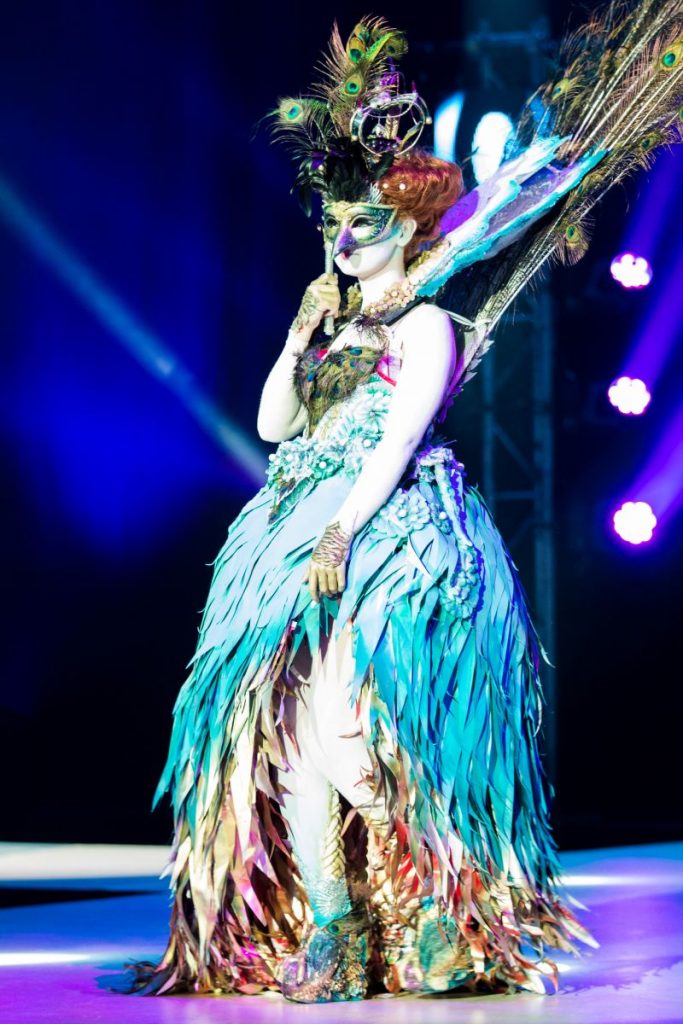 Eighty secondary school students sporting their stunning couture designs fashioned from junk stormed the stage at the 3Arena Dublin tonight, competing at the Grand Finale of Bank of Ireland Junk Kouture in association with Repak Recycled Fashion Competition 2015. After months of preparations the talented teenagers strutted the catwalk with their carefully choreographed routine in the hope of impressing the judges in front of thousands of screaming fans in Ireland’s largest indoor venue.

Bank of Ireland Junk Kouture in association with Repak enlisted the help of an outstanding new judging panel for 2015. Model and TV presenter Vogue Williams took pride of place beside gifted stylist and TV presenter Rob Condon, art and design educator Tracey Fahey and Repak Marketing & Communications Manager Laura Murphy were joined by a very special guest judge who is used to sitting at the firing desk of the X-Factor, Louis Walsh! Louis joined the line up to judge the brand new category of Best Performance.  The panel had the challenging task of selecting the winners of several different categories plus the Overall Winner for Bank of Ireland Junk Kouture 2015 from the extraordinary pool of talent.

Elizabeth Curran co-founder of Bank of Ireland Junk Kouture said, ‘Every finalist deserved to walk the catwalk in the 3Arena tonight, with almost 1,000 entries this year the competition is getting tougher as the stakes get higher year on year. The standard of outfits this year was unbelievable on every level. The judges had an unenviable job on their hands to decide on the winners of Bank of Ireland Junk Kouture 2015 in association with Repak’.

The overall Bank of Ireland Junk Kouture in association with Repak winner for 2015 was announced as Le Paon Majestueux modelled by Sarah Cox. The outfit made from chicken wire, old magazines, aluminium and peacock feathers was an entry by Elphin Community College, who won a cash prize of €2,500 for their school along with iPad Minis and a further cash prize of €500 for the winning team.

The winner for the south was Genesis Reborn from Castlecomer Community School in Kilkenny. Building Blocks from Loreto Balbriggan, Dublin scooped the regional prize for the eastern region while Combustion from Scoil Mhuire, Buncrana, Co. Donegal took the trophy for the Northern region.

Commenting on the announcement Laura Lynch, Head of Youth at Bank of Ireland said “As Ireland’s leading Bank for students we are delighted to sponsor the Bank of Ireland Junk Kouture competition. This is our third year running sponsoring the competition which continues to grow in popularity with almost 1,000 entries this year.

“The level of creativity and passion on show tonight was truly phenomenal.  We’re delighted to support a competition which makes dreams come true and empowers Ireland’s young people to collaborate and innovate. Every single contestant did themselves, their families, friends and their schools extremely proud and I want to congratulate everyone that made it to the finale, in particular tonight’s winners. I am sure we will hear lots more from these talented young people well into the future.” concluded Laura.

Sheer Glass from Carndonagh Community School in Galway and Mediva from Moate Community School walked away with The Bank Of Ireland Glamour Prize presented to them by Vogue Williams. Both winners of this category and the models will attend the Royal Film Premiere in London later this year.

“The variety, style and creativity on display is inspiring,” said Laura Murphy, Marketing and Communications Manager of Repak and Junk Kouture judge. “It is fantastic to be involved in something that shows such brilliance in using discarded materials to create works of haute couture. This nicely compliments Repak’s passion for better recycling. Our mission is to help everyone to recycle better, and we have seen Ireland become the second in Europe for packaging recycling. We have been honoured to be involved and our heartfelt congratulations to tonight’s winners.”

Fresh and Famous caught the eye of the judges and in particular, Laura Murphy from Repak to scoop the Repak Recycling Prize for 2015. The participants from Scoil Mhuire Community School, Clane, County Kildare walked away with an iPhone 6 for her efforts on incorporating packaging into the design.

Le Paon Majestueux from Elphin, Co Roscommon also received a bursary to study fashion knitwear and textiles in Limerick School of Art and Design as part of the LSAD Scholarship programme.

The Bank of Ireland Most Enterprising Team award went to Cnoc Mhuire, Granard for their design Pretty Poll Topper and saw them take home €300 worth of One4All vouchers for their creative juices.

The overall Best Performance Prize was presented to Larkin Community School for their design Supercalifashionisticexpialidocious by X-Factor judge, Louis Walsh.

The Best Hair and Make-Up prize went to Queen of the Forest for the teams’ artistic work in making her look as glamourous as possible by stylist and judge, Rob Condon.