New Award for Overseas Startups Setting Up in Ireland 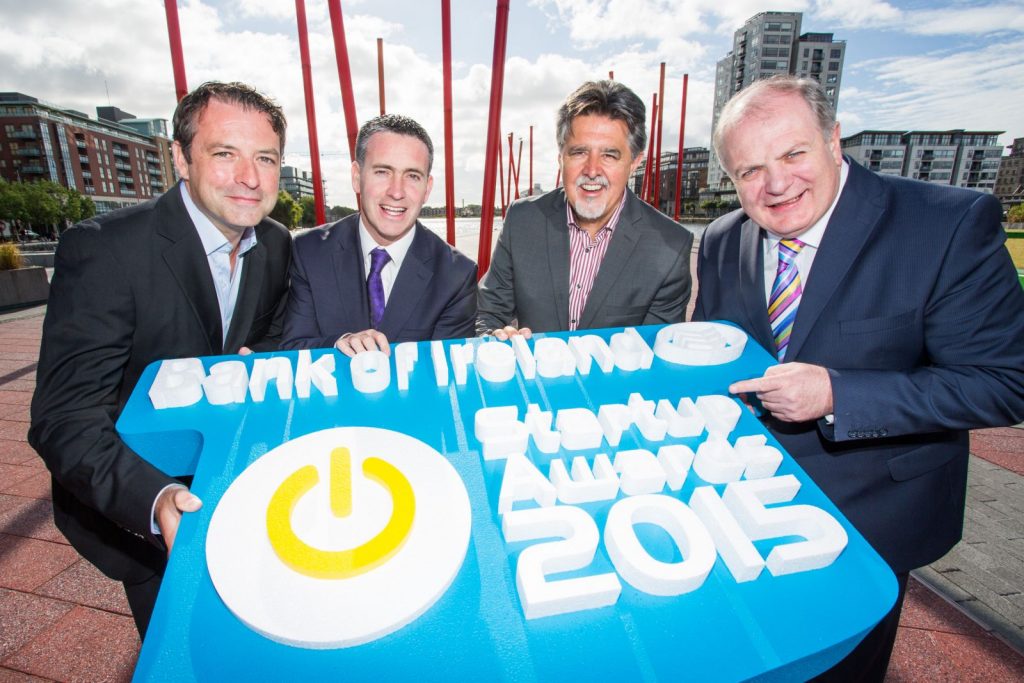 Pictured at the launch of the Bank of Ireland Startup Awards 2015 are Stephen Dillion, Founder of Startups Ireland, Minister of State at the Departments of Education and Skills and Jobs, Enterprise and Innovation with Special Responsibility for Skills, Research and Innovation Damien English, TD, Gerry Prizeman, Head of Enterprise Development at Bank of Ireland and Gavin Duffy, Startup Awards Judge and successfull entrepreneur

Bank of Ireland today, Tuesday, 7 July 2015 launched the Bank of Ireland Startup Awards 2015 at the Bank’s state of the art branch in Grand Canal Square in Dublin, which has dedicated workspace facilities for startup companies to work from. This is the second year that the Bank has sponsored the awards which are open to startup companies in Ireland. The awards were formally launched by Minister of State at the Departments of Education and Skills and Jobs, Enterprise and Innovation with Special Responsibility for Skills, Research and Innovation Damien English, TD and Startup Awards Judge and successful entrepreneur Gavin Duffy.

There are 11 awards categories which recognise and reward Irish startups for their success in business across a range of sectors including digital, food and drink, retail and technology. The awards also include a Grand Prix award for the startup of the year and a Startup Hero award. Last year over 750 companies entered the awards, the winner of the Grand Prix award was Agile Networks and the Irish Biz Party won the Startup Hero Award, highlighting the many different companies across all sectors that enter the awards. This year a new category has been added to the awards to recognise the significant contribution made by those who come to Ireland to set up their business – the Overseas Startup Setting Up in Ireland Award.

Companies can enter the awards on their own behalf or can be nominated by a friend or colleague. Again this year there will be four regional finals which will take place across Dublin, the rest of Leinster, Munster and Connacht/Ulster. Regional winners will be shortlisted for the national final taking place in Dublin in the autumn.

Speaking at awards launch Gerry Prizeman, Head of Enterprise Development at Bank of Ireland said “We are delighted to sponsor the Startup Awards again this year. The awards highlight the hard work, achievements and contributions that Ireland’s innovators and entrepreneurs make to the economy as well as offering them the opportunity to promote their company on a national and international stage.

“As Ireland’s No.1 Bank for business we have a number of initiatives and supports in place to help people start, grow and develop their business. These include our Enterprise Lounges in Grafton Street and Mainguard St Galway where new and developing businesses can access the space free of charge to run meetings, presentations and workshops. We also have our newly designed branch in Grand Canal Square in Dublin which offers the above facilities as well as a co-working space and workbench where start ups can work alongside like-minded people and create new business opportunities. Both financial and non-financial support is important when setting up a new business and at Bank of Ireland we offer both to customers and potential customers. I encourage all startups to enter these unique awards. Given the high calibre of entries last year I am looking forward to seeing the entries which will showcase the success, hard work and dedication of Ireland’s entrepreneurs. ” concluded Gerry Prizeman.

Minister of State at the Departments of Education and Skills and Jobs, Enterprise and Innovation with Special Responsibility for Skills, Research and Innovation Damien English, TD said “Awards, like the Bank of Ireland Startup Awards, are an important step in providing the right environment to foster and develop entrepreneurial talent across all sectors of Irish business. They are also an asset as we seek to encourage more people to start up their own enterprises with quality business ideas.

“Ambitious companies are the backbone of a healthy economy. It is the entrepreneur that has the spark of imagination, the drive to turn an idea into a viable business and the commitment to grow that business in a way that creates wealth and jobs. It is that contribution that we acknowledge and celebrate with these Awards.”

Stephen Dillion, Founder of Startups Ireland said “The first few years in any business are invariably the toughest and the Startup Awards more than anything else are here to offer encouragement and support to entrepreneurs who are working hard and innovating to build businesses that will ultimately create employment and benefit the greater economy.

“The Startup Awards are now entering their fourth year and each year we receive feedback from entrants that the awards were instrumental in supporting their business by providing additional credibility, boosting morale and by opening new doors with the exposure received.

“There is now a real vibrancy in the Irish Startup Ecosystem and it is essential that we maintain this energy and momentum. With the Startup Awards we are proud to play our part in supporting entrepreneurship in Ireland.”

To enter or nominate someone for a Startup Award visit www.startupawards.ie . Entry into the awards is free and is open to sole traders, partnerships and companies that have been set up in Ireland that are in business for three years or less with up to 30 employees. The awards judging committee will comprise of representatives from Bank of Ireland, Startups Ireland and leading Irish entrepreneurs.

The closing date for entries into the awards is Thursday, 3 September 2015, the regional finals will take place during October with the national gala final taking place in Dublin on Thursday, 12 November 2015. Further information on the awards will also be available via the Bank of Ireland Twitter account @BOIbusiness and a dedicated hashtag has been created for the event #boistartupawards.

There are 11 categories for the awards: