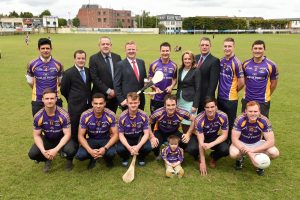 Bank of Ireland today (Wednesday, 3 June 2015) is delighted to announce that it has signed an agreement to become the new official sponsor of Kilmacud Crokes GAA Club. The sponsorship will commence immediately and will see the Bank sponsor the club for an initial three year period. The deal includes exclusive branding rights on all Football, Hurling, and Camogie jerseys for Senior, Minor and Féile (under 14) teams and will also, over time, see the Bank’s branding appear on the back of all other team jerseys in the club. The agreement strengthens Bank of Ireland’s support for sport, in particular the development of sport among young people as the sponsorship includes an extensive programme of games development and activity for the club’s younger members.

Kilmacud Crokes was first established in 1959 and has grown to become one of the largest GAA clubs in the country with over 4,500 members. The club has enjoyed huge success over the years and are currently the reigning Dublin Senior Hurling Champions. The club also won the Dublin Senior Hurling title in 2012, the Dublin and Leinster Senior Football titles in 2010 and were crowned All-Ireland Senior Club Football champions in 2009.

Commenting on the sponsorship announcement John Keegan, Director, Distribution Channels at Bank of Ireland said “Bank of Ireland has a proud history of supporting sport in communities across the country and has supported GAA at Championship level for several decades. This new sponsorship gives us a unique opportunity to invest in the development of the next generation of talented players in South County Dublin, which will keep the wonderful games of Football, Hurling, Camogie and Ladies Football at centre stage in this community. As the leading Bank in the Kilmacud Crokes community with branches in Stillorgan, Dundrum and Montrose this sponsorship is an excellent fit for both parties.

“An important part of this new sponsorship is the opportunity to be part of an extensive youth programme as the club provides coaching to eight primary schools and has a relationship with nine secondary schools. The youth programme includes the Kilmacud Crokes summer leagues, Silverparks summer coaching, sport camps in Glenalbyn, the Gaelic Football School of Excellence, summer and winter Athletic Development Programmes, a Transition Year Coaching Programme and sponsorship of the Club Coaching Conference.

“In addition to the support for the development of the different sporting teams at the club we are also extending our Enterprise Town Programme to Kilmacud Crokes. This activity will include quarterly events taking place in the club focused on promoting and driving business momentum for SMEs and the wider sports and social community in the locality. The sponsorship will see the Bank provide a dedicated Mobile Mortgage Manager for the club and will include regular Mortgage Clinics and annual events focused on helping people in the community when they are considering buying or renovating their homes” concluded John Keegan.

Speaking about the announcement Club Chairperson Kevin Foley said “Kilmacud Crokes GAA Club has a membership of over 4,500 people and is at the heart of the wider community in Stillorgan. We are delighted to be involved with Bank of Ireland, a Bank with deep roots and involvement with the community.

“The club takes pride in the fact that through an entirely volunteer effort it creates the opportunity for its members to find sporting fulfilment through Gaelic Games. We like to be successful on the field but it is more important for us to create the structures and environment where our players can achieve their sporting potential. Kilmacud Crokes GAA Club looks forward to developing a strong positive relationship with the Bank over the coming years through which both organisations can develop and grow our ties and supports for the community”, added Kevin Foley.