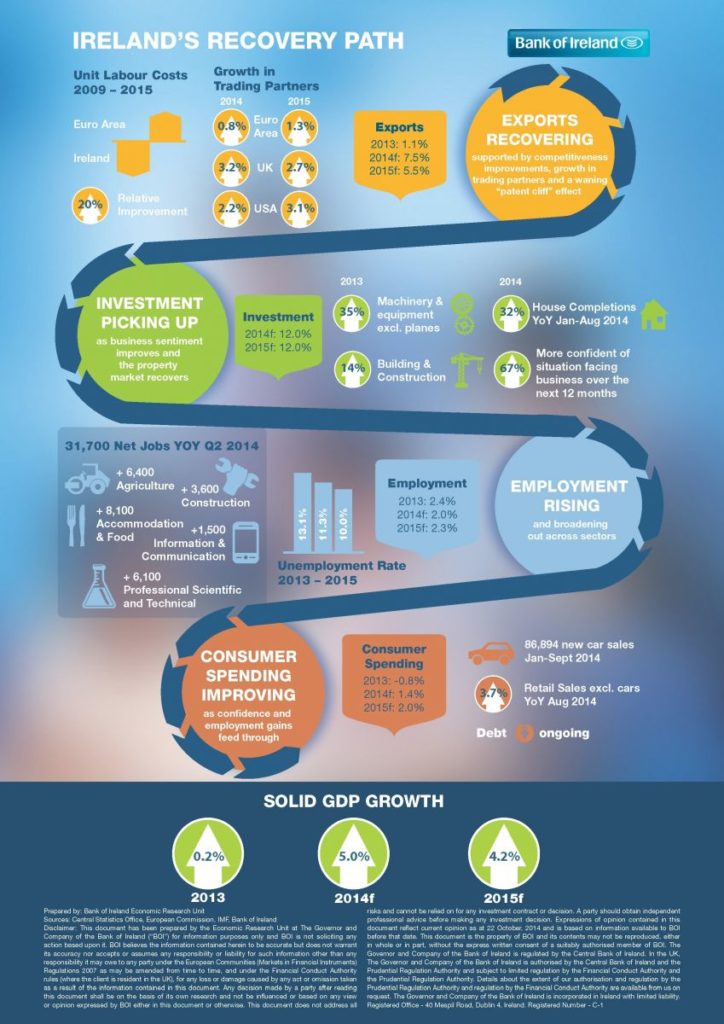 Thursday 23 October, 2014:  Bank of Ireland’s latest Quarterly Economic Outlook for the Irish economy has forecast a strengthening of the recovery, with GDP growth revised upwards for this year to 5% from 2.8% in its July Outlook.  For 2015, growth of 4.2% is projected, up from 3.4% previously and reflecting in part the changed fiscal stance with Budget 2015 providing for a €1bn stimulus, as opposed to the originally envisaged consolidation of €2bn.

Commenting Loretta O’Sullivan, Group Chief Economist, Bank of Ireland said:  “News on the economic front has been positive through 2014, with headline measures of activity for the first and second quarters, and high-frequency data for the third, confirming that the economy is strengthening.  The data also show that the recovery has broadened out, with domestic demand now contributing to growth along with exports.  This was expected and is in line with the recovery path that Ireland has been following for some time.

“The scale of the improvement has surprised on the upside.  GDP increased by 3.8% year-on-year in the first quarter, with the pace of growth picking up to 7.7% in the second.  While the latter likely overstates the underlying strength of the economy, it points to strong momentum and a recovery that is gaining ground.

“Exports are expected to benefit from relatively strong growth in the US and UK next year, and from the recent decline in the euro, though the weakness of the euro area economy is a concern.  Investment is forecast to increase at a double-digit pace as demand picks up further; while ongoing employment gains, modest earnings growth and the measures announced in the Budget should support household disposable incomes and stronger consumer spending.

“With overall activity strengthening, unemployment is forecast to fall to 10% next year, from just over 11% in 2014.  Inflation is expected to remain relatively low, given the spare capacity in the economy”, concluded Loretta O’Sullivan.

A full copy of the Bank of Ireland’s Quarterly Economic Outlook is attached, in addition to a graphical representation of the recovery path that Ireland is following.