The BSA represents a review under the Central Bank of Ireland’s Supervisory Review and Evaluation Process (SREP) and Full Risk Assessment (FRA) and, as such, the result may be considered by the Central Bank of Ireland in determining the Pillar 2 capital requirements of the Bank. Given the proximity of the Capital Requirements Directive and Capital Requirements Regulation (CRD/CRR), together referred to as CRD IV, the PiT capital assessment includes a pro-forma review of capital adequacy versus these anticipated new standards.

The BSA results and PiT outcomes remain subject to ongoing engagement between the Central Bank of Ireland and Bank of Ireland and will inform the Bank’s Internal Capital Adequacy Assessment Process (ICAAP), capital planning, financial statements and internal stress testing programmes. While the outcome of this engagement cannot be anticipated with certainty and actions taken following engagement with the Central Bank of Ireland may adversely impact capital ratios, the Bank continues to expect to maintain a buffer above a CET1 ratio of 10 per cent on a Basel 3 transitional basis.

With respect to Asset Quality, the Bank’s Interim Management Statement of 1 November 2013 stated “The macroeconomic environments in Ireland and the UK, the main markets in which we do business with our customers, have remained broadly stable to slightly improved from the first half of the year and our loan portfolios are continuing to perform in line with our expectations. The Group is continuing to meet all targets for the provision of commercially appropriate restructuring arrangements to cooperating customers who are having difficulty in meeting contractual repayments. Total arrears in our Irish mortgage loan books stabilized in the third quarter of 2013, with the level of early arrears declining.” The above continues to be the Bank’s experience including that total arrears in the Irish mortgage books fell in October 2013 and early arrears continued to decline.

The European Central Bank (ECB) under the forthcoming Single Supervisory Mechanism (SSM) will also conduct a Comprehensive Assessment (CA) during 2014. The CA will include a balance sheet and risk assessment and is expected to encompass the European Banking Authority (EBA) and ECB EU-wide stress test. The Central Bank of Ireland has noted that while it is the intention that the significant reviews and outputs of the Central Bank of Ireland’s BSA will be utilised in the SSM CA, it is currently not possible to confirm whether this will be the case. 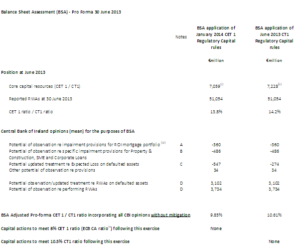 i. In the BSA application of January 2014 CET 1 Regulatory Capital rules, core capital resources have been adjusted to reflect the Basel 3 transition adjustments which are expected to apply in January 2014. These transition adjustments principally relate to the pension deficit, expected loss and significant investments.
ii. The BSA application of the June 2013 Regulatory Capital rules are consistent with the CT1 capital as at 30 June 2013 reported by the Bank.
iii.    The Central Bank of Ireland’s opinion for the purposes of BSA is that the potential adjustment to ROI mortgage impairments is €400m. However, the Central Bank of Ireland note that this is subject to finalisation of discussions on the mortgage loan file reviews and may reduce by c. €40m.
iv.    The ECB has recently stated that the Comprehensive Assessment (CA) will use a target capital ratio of 8% under the CRD IV transitional arrangements.

Notes to the Schedule 1

B. In the context of the BSA, as part of its review of risk classifications and loan loss provisions for Property and construction, SME and Corporate loans (together “Commercial loans”), the Central Bank of Ireland conducted independent loan file reviews with a sampling of certain cohorts of populations.  The Central Bank of Ireland notes that provision estimation is in and of itself uncertain, as individual assessment is dependent on assumptions regarding the future realisation of the exposure or underlying collateral. Using the observations from the sampling approach and through extrapolations the Central Bank of Ireland has estimated, for the purposes of the BSA, a range of potential specific provision recognitions with a mean estimation of c. €486m greater than Bank of Ireland’s levels as at 30 June 2013. The Bank remains confident in its own methodologies, calculations and impairment provisions as at 30 June 2013 and, in the context of the approaches taken during the BSA, the Bank notes that the range of estimated / extrapolated potential mean recognitions represent 9% of the impairment provision stock for Commercial loans as at 30 June 2013 and represent c. 1% in related provision coverage terms.

C. In the context of the BSA, the Central Bank of Ireland determined an updated and alternative capital treatment of defaulted assets (in terms of both Expected and Unexpected Loss capital requirements), which from a pro-forma capital perspective would result in an expected loss change of up to potentially c. €547m. The Bank notes that it has already substantially incorporated this update in methodology to its Basel 3 projections, including in its pro-forma Basel 3 Fully Implemented CET1 ratio of 8.6% as at 30 June 2013.

D. The BSA encompassed a review of risk weighted asset calculations and the primary focus of this review was the Internal Ratings Based (IRB) approach utilised by the Bank. In the context of the BSA, the Central Bank of Ireland assessed the outputs of the Bank’s IRB models to a series of tests and challenges, as a consequence of which the Central Bank of Ireland has estimated a number of potential observations/updated treatments for RWAs as set out in Schedule 1. A full assessment of internal models used for the calculation of RWA, incorporating a process of agreement with the Bank, did not take place within the time frame of the BSA but rather the Central Bank of Ireland expects that relevant actions resulting from the review will be detailed in a Risk Mitigation Plan as per normal supervisory engagement.