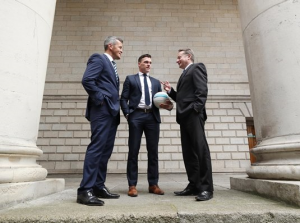 Bank of Ireland Life has announced the appointment of Dublin GAA star Paddy Andrews to the position of Premier Wealth Manager. Paddy brings extensive experience to his new role having spent several years with Davy.

With particular expertise in Pensions and Investments, Paddy started his career at Davy as a dealer and was most recently a Broker Consultant with Davy Select, the broker arm of the Davy Group. He held this role for the past two years, responsible for the Dublin and Leinster region.

Paddy holds a business and finance degree from Dublin City University and also holds a QFA from the Institute of Bankers Ireland.

Commenting on the appointment, Seán Ó Murchú, Managing Director, Bank of Ireland Life said: “We are delighted to announce Paddy’s appointment to the role of Premier Wealth Manager at Bank of Ireland. In his new role he will support customers in achieving their financial objectives by delivering expert advice and bespoke financial planning tailored to their individual circumstances.”

Mr. Ó Murchú concluded; “Paddy has enjoyed tremendous success both on and off the field and we wish him every success in his new role.”