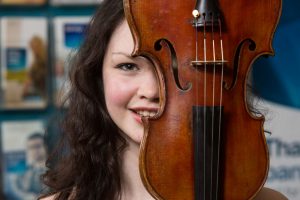 Seven talented young classical musicians from across Ireland have been selected to compete in the national final of Bank of Ireland Catherine Judge Memorial Award 2016 on the 16 April. The award, which is now in its tenth year, is presented annually to an exceptional solo classical musician who wishes to pursue a third-level music education. Pictured here is last year’s winner, Mairéad Hickey a pupil of CIT Cork School of Music. Mairéad received a bursary of £5,000 towards her musical studies and her school, CIT Cork School of Music, received £1,000. The award was created as a lasting tribute to Catherine Judge, an employee of Bank of Ireland, who passed away in August 2005. Catherine had a great love of music and loved to see young people get opportunities to grow and develop

Seven talented young classical musicians from across Ireland have been named as finalists in the national final of Bank of Ireland UK’s Catherine Judge Memorial Award 2016.

The Award is part of the bank’s wider schools programme, the most comprehensive of its kind in Ireland and was created as a lasting tribute to Catherine Judge, an employee of Bank of Ireland UK, who passed away in August 2005. The final will take place in the Great Hall, Queens University, Belfast on Saturday 16th April.

Now in its tenth year, the Catherine Judge Memorial Award is presented annually to an exceptional solo classical musician who wishes to pursue third-level music education. The Award provides invaluable financial assistance to an outstanding classical musician student and aims to support a new generation of musical talent.

The talented solo musicians will perform in front of a distinguished panel of judges, including chair of the panel, Barry Douglas OBE, world renowned pianist and founder of Camerata Ireland. The winner of the award will receive a bursary of £5,000 towards their musical studies and their nominated school or society will receive £1000 for the purchase of a musical instrument.

Barry Douglas said: “I am delighted to once again be involved in the Catherine Judge Memorial Award. Having chaired the inaugural award it’s wonderful to return ten years later and see this fantastic award once again providing a very special and unique opportunity for these young musicians to showcase their talent. Congratulations to the seven talented young musicians selected for the final stage and I wish them the best of luck.”

Sean Sheehan, Regional Director, NI Consumer & Small Business, Bank of Ireland UK said: “This Award is a fantastic opportunity for young musicians across the island of Ireland to show case their talents. I would like to congratulate all of the shortlisted students on reaching the final stage of the Award and look forward to hearing them perform in the final.”