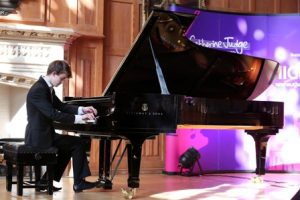 Eoín Fleming, a pupil of St Mac Dara’s Community College was presented with the Catherine Judge Memorial Award on Saturday 16th April, 2016 following a live final held in the Great Hall at Queen’s University, Belfast. Eoín performed a flawless recital of Nocturne Opus 55, no 2 by Frédérick Chopin (1810 – 1849) and Sonata no 2, Opus 36, 3rd movement Sergei Rachmaninov (1873 – 1943) before an audience of 150 people at the event.

Eoín Fleming, a pupil of St Mac Dara’s Community College was announced as the winner of the Catherine Judge Memorial Award on Saturday 16th April, 2016 following a live final held in the Great Hall at Queen’s University, Belfast.

Eoín performed Nocturne Opus 55, no 2 by Frédérick Chopin (1810 – 1849) and Sonata no 2, Opus 36, 3rd movement Sergei Rachmaninov (1873 – 1943) to the 150 delighted audience that included friends, family and fellow classical musicians. Eoín was presented with the award by Barry Douglas OBE, world renowned pianist and founder of Camerata Ireland, who chaired the Catherine Judge Memorial Award judging panel in its inaugural year and returned again this weekend in its tenth year.

This year fellow judges included David Brophy, Principal Conductor of the RTÉ Concert Orchestra and leading Irish conductor of his generation along with Sarah Smith, Soloist Orchestral and Chamber Musician and winner of the first Catherine Judge Memorial Award. The event was compèred by Mark Carruthers OBE of BBC Northern Ireland.

Eoín received a £5,000 bursary towards his third level studies and St Mac Dara’s Community College, received £1000 for the purchase of a musical instrument.

The Catherine Judge Memorial Award is presented annually to an exceptional solo classical musician who wishes to pursue third-level music education. The Award, which is part of the bank’s wider schools programme, the most comprehensive of its kind in Northern Ireland, was created as a lasting tribute to Catherine Judge, an employee of Bank of Ireland UK, who passed away in August 2005.

Applications were welcomed from students in Ireland, North and South by including it in Bank of Ireland’s Secondary Schools Programme which is designed to teach students a range of topics including finance and banking.

Chair of the Judging Panel Barry Douglas said: “I am delighted to once again be involved in the Catherine Judge Memorial Award. Having chaired the inaugural award it’s wonderful to return ten years later and see this fantastic award once again providing a very special and unique opportunity for these young musicians to showcase their talent. On behalf of the panel of judges, I would like to congratulate Eoín on his win today and we look forward with keen interest as his career develops in the coming years.”
Sean Sheehan, Regional Director, NI Consumer & Small Business, Bank of Ireland UK said: “I never fail to be impressed by the incredible talent and hard work of those who take part in this Award. I would like to thank each of the nine finalists for their outstanding performances today and congratulate Eoín on his winning recital which had each of us in the Great Hall enthralled this afternoon.”

Bank of Ireland UK would also like to thank the Arts Council of Northern Ireland for the loan of the beautiful Steinway piano used in Saturday’s event.
« Go Back