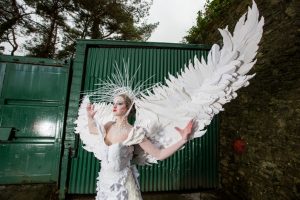 Bank of Ireland today has announced the regional finalists for Bank of Ireland Junk Kouture 2016. Now in its sixth year the all-Ireland leading fashion and art competition for secondary schools challenges students to create unique, original and innovative outfits from recycled materials and junk. Open to students nationwide, entries for 2016 surpassed all expectations making it the biggest competition to date.

With entries for the competition up by 18%, only 80 designs from each of the four provinces were lucky enough to be Silver Ticket winners. The anticipation caused a social media frenzy as thousands of students logged on to the BOIStudents Facebook platform from each region to find out if they had been successful. Regional finalists will be presented with a precious Silver Ticket at their respective Finals in March, though some regional winners received a surprise visit from the Bank of Ireland Junk Kouture team who were on the road yesterday.

Speaking about the Silver Tickets, Laura Lynch, Head of Youth Banking at Bank of Ireland said; “The calibre of entries for this year’s competition has been fantastic and the judging panel had a very tough job choosing the top 80 from each region. With every entry being uniquely choreographed to music, we are really excited to see the models bring their designs to life on stage at the Regional finals. We wish everyone the best of luck with the next stage of the competition and remind finalists to get innovative about how they gather support through the Bank of Ireland Junk Kouture voting app.”

As part of the judging process, the public can get involved by casting a vote for their favourite design through the Bank of Ireland Junk Kouture voting app. Accessed through the BOIStudents Facebook page (www.facebook.com/BOIstudents), voting opens for one week before the regional competitions from 9am Monday 22nd February to 12 midnight Friday 26th February. Individuals can cast a single vote every 24hours. Votes account for 10% of the final mark and can make a huge difference in such a heated competition. Bank of Ireland is encouraging students to think innovatively about how they gather support through the voting app with a special Bank of Ireland Award in the mix for the Most Innovative Designer at the National Final in April.

For details on the full list of 320 regional finalists for Bank of Ireland Junk Kouture 2016 visit https://www.facebook.com/BOIstudents.

Notes to the Editor:

About Junk Kouture: Junk Kouture was created in 2010 by entrepreneurs Elizabeth O’Donnell and Troy Armour. The competition places a great emphasis on recycling and re-using junk materials in an exciting and creative way, resulting in spectacular and creative work gracing the catwalk shows.

About Bank of Ireland: Bank of Ireland Secondary Schools programme is a comprehensive financial education programme for schools that can be adapted to meet the needs of schools at all levels.