Bank of Ireland opens the doors at new Ardkeen branch 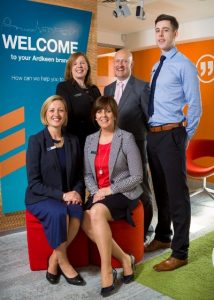 Bank of Ireland was delighted to officially open the doors to its new flagship Ardkeen branch on Friday, 13 May. In addition to providing a comprehensive range of products and services for both personal and business customers, Ardkeen also has *extended weekly and weekend opening hours, to facilitate customers outside of regular work times. The opening of the new branch is part of a €2m investment for Waterford following major refurbishment and modernisation at branches in Lisduggan and The Quay in late 2015.

Bank of Ireland has identified Ardkeen as one of the fastest growing regions in Waterford with major residential and commercial development. Adding a branch demonstrates the Bank’s focus on the provision of quality banking services to new emerging communities as well as a strong commitment to Waterford.

As one of the Bank’s brand new branches, Ardkeen is designed to allow customers interact with the full range of Bank of Ireland services which include two internet and phone banking booths as well as two internal *Lodgement ATM machines and one external Lodgement ATM machine where customers can lodge cheques and cash, as well as withdraw cash. Ardkeen Branch is also one of only a small number of branches nationwide to feature a Mortgage Video Conference Booth, where customers can speak to a qualified mortgage advisor via video conferencing in-branch during busy times. Bank of Ireland is very committed to supporting the local community and is planning a broad range of activity from enterprise seminars to digital workshops with local schools, businesses and seniors.

Commenting on the announcement, Joe Madigan, South East Regional Manager, Bank of Ireland said: “We are delighted to open the doors to our new branch in Ardkeen. As the largest lender to the Irish economy, our national branch network is of vital importance to us and this continued investment ensures we are strongly embedded with the local community in Waterford.”

The Bank has appointed Ardkeen’s first Branch Manager, Paul Muldowney, a Killkenny man with strong Waterford ties. Paul spent his teenage years living in Waterford, and attending De La Salle, when his father was proprietor of the ‘Corner House’ pub in Ballybricken. Paul, an experienced financial advisor and Branch Manager, with a particular interest in enterprise and startups, has worked with Bank of Ireland for 18 years in branches including Kilkenny city, Castlecomer and Abbeyleix, Co. Laois. Married with three children, Paul now lives in Graigue-Ballycallan, Co. Kilkenny. A huge sporting enthusiast, Paul is a dedicated Cats fan, who also practices as a physical therapist in his spare time, looking after a number of senior Kilkenny hurlers.

Speaking about the opening, Paul Muldowney, Branch Manager added: “Bank of Ireland has made a major investment in Waterford and its future and the staff and I are looking forward to serving the people in this community and beyond over the months and years ahead. I would like to extend a warm welcome to customers and non-customers alike to come along and visit us whether it’s just to see our new modern branch layout, have a chat or do some banking.”

The launch of Ardkeen branch took place at the start of Bank of Ireland’s 14th National Enterprise Week 2016 which runs from the 13th to the 20th May. The initiative features a number of events and seminars focused on business growth and networking which will take place in locations around the country.