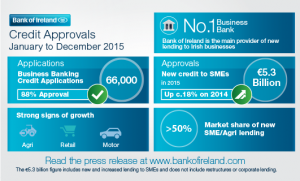 Bank of Ireland Business Banking has announced new credit approvals to Irish small and medium businesses to the end of December 2015 of €5.3 billion, up c. 18% on the same period last year. The €5.3 billion figure includes new and increased lending and does not include restructures.

Bank of Ireland received a total of almost 66,000 credit applications, up c. 8% year on year. 16,297 applications were received in the final quarter and 88% of the applications were approved. Bank of Ireland continues to be the main provider of new business lending to the market, with more than 50% of the flow of new lending to businesses, based on analysis of Central Bank data. Agri and motor in particular demonstrated ongoing growth with strong performances from the nursing home and retail convenience sectors also.

“We had another strong year of lending to Irish business in 2015, with credit approvals up 18% year on year. As domestic economic recovery continues, the business community is looking to the future with a greater degree of confidence.

“The motor market showed further signs of improvement, with total new car registrations in 2015 up 30% on the previous year, from 96,284 to 124,945, according to figures from the Society of the Irish Motor Industry. Bank of Ireland Finance enjoyed new business volume growth of 40% across its franchise partners, who account for more than 50% of the market. The growth trajectory is set to continue with the Bank experiencing a very strong start to 2016 through our franchise partners.

“The retail sector gained momentum last year with the latest data showing that sales volumes improved by close to 6.2% in the year to November. The reduction in unemployment and the increases in disposable income are beginning to feed through, reflected through improving consumer sales numbers. The development and expansion of nursing homes is another area which saw growth in 2015 as businesses recognise the lack of private or public capacity to service an ageing population.

“The agricultural sector is an important growth sector for Bank of Ireland and overall credit approvals in 2015 were up 7% on 2014 figures, at €665m. While milk prices are expected to increase, the timeframe for this price recovery has extended beyond initial expectations to the second half of 2016. Beef supplies in the first half of 2016 are anticipated to remain tight with increased supplies coming onto the market in H2 2016 as a result of dairy herd growth, which started last year.

“Businesses are beginning to expand and invest, and this is beginning to be reflected in increased demand for term loans. We expect this trend to continue as the overall outlook for 2016 is positive, with a number of indicators pointing to sustained improvement in the general economy, including higher consumer spending, continued employment gains and increased business investment,” concluded Mark Cunningham.