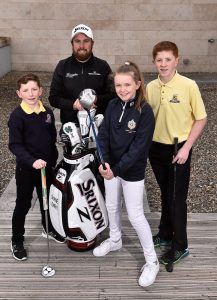 Bank of Ireland has today (7th April, 2016) announced a three-year sponsorship deal with the Dubai Duty Free Irish Open Hosted by The Rory Foundation. Professional Irish golfer and Bank of Ireland Ambassador Shane Lowry was on hand to announce the three-year deal, which will see Bank of Ireland become one of the Official Sponsors of the tournament.

The 2016 edition of the Dubai Duty Free Irish Open will take place at the K Club from May 19-22, and will be hosted by Rory McIlroy’s charitable foundation for a second year. Some 100,000 people are expected to attend the Kildare venue over the course of the four day tournament with Irish TV coverage being shared between RTE and Sky.

As sponsors, Bank of Ireland will join Lowry to support the Irish Open Golf Skills Challenge for under-15s, which is run by the European Tour in conjunction with the Confederation of Golf in Ireland. The competition, which is open to clubs across the country, aims to help develop young golfers’ putting, chipping, iron play and driving skills in a team environment. The two winning teams will be given the opportunity to attend the Pro-Am in Kildare on May 18, and to meet some of the world’s top golfers.

As part of the sponsorship, Bank of Ireland is also running a competition offering one lucky golf club in Ireland the chance to have its branding displayed on Lowry’s golfing attire as he competes on both the Thursday and Friday of the tournament. This is an extension of the award-winning ‘Sponsor for a Day’ which Bank of Ireland has successfully run for small businesses around its Leinster Rugby and Munster Rugby sponsorships. Golf clubs can enter this ‘Sponsor for a Day’ competition up to April 22 by going online at www.bankofireland.com/sponsorforaday. A shortlist will then go to a public vote via Shane Lowry’s Twitter account from May 3-6, before the final winner is revealed.

Shane Lowry, who famously won the Irish Open as an amateur in 2009, said: “Obviously I am delighted to see Bank of Ireland coming on board as an official sponsor of our national open. On a personal level, I know how strong a corporate partner Bank of Ireland will be for the tournament, having worked closely with their team for the past couple of years. They have been a really great partner for me, and I’m really excited about some of the new initiatives they will be launching with their sponsorship of the Irish Open.

“Personally I’m particularly looking forward to being actively involved in the Irish Open Golf Skills Challenge, which is open to kids right across Ireland. You only have to look at the impact that Augusta’s Drive, Chip and Putt Challenge has had here in the U.S. during the Masters this week to see how powerful an initiative like this could be to get more kids involved in golf. Hopefully we can capture young people’s imaginations back home in Ireland in the same way and grow the game at grass roots level around the country.”

Commenting on the announcement, Tom Hayes, CEO, Corporate Banking at Bank of Ireland, said: “We are delighted to be strengthening our commitment to Irish golf with the announcement of a three-year sponsorship of the Dubai Duty Free Irish Open. As an Irish business, we are proud to be associated with an event that has developed into one of the most popular tournaments on the European Tour with a wealth of golfing talent expected from both home and abroad.

“Given Bank of Ireland’s commitment to promoting grass roots sports, we are particularly excited to be supporting the Irish Open Golf Skills Challenge, which will encourage Ireland’s young talent to participate in communities throughout Ireland. Together with our Ambassador Shane Lowry, we look forward to supporting the development of Ireland’s next wave of golfing talent and perhaps unearthing some future golfing greats!”

John Roche, Director of Golf and Business Development, Confederation of Golf in Ireland, said: “The Confederation of Golf in Ireland is delighted to be working with Bank of Ireland in bringing our Skills Challenge to every corner of the Island. This unique competition gives our Golf Clubs and junior players a wonderful chance to part in the 2016 Irish Open. In particular, it offers our younger players the opportunity to see what a great sport golf is and to get them really excited about the game. By working to foster a love of the sport among young players, it will help encourage the next generation of Irish golfers, which bodes extremely well for the future success of the sport we all love.”