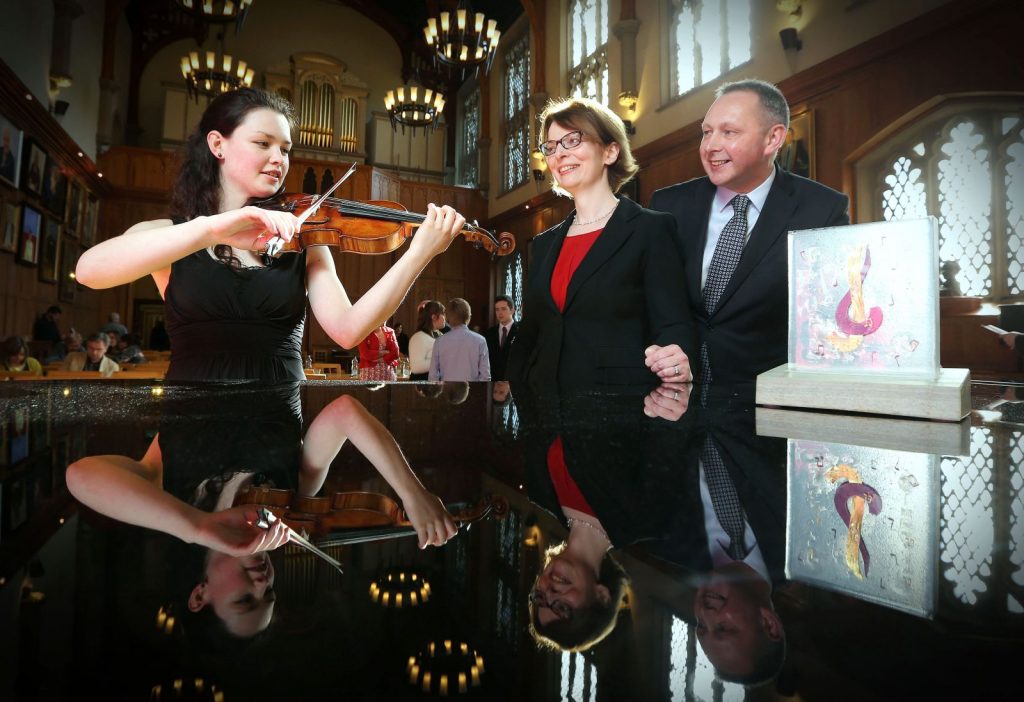 Mairéad Hickey a pupil of CIT Cork School of Music, was presented with the Bank of Ireland Catherine Judge Memorial Award on Saturday 18th April 2015, following a live final held in the Great Hall at Queen’s University, Belfast.

Professor Fiona Palmer, Professor of Music at Maynooth University, who chaired the Bank of Ireland Catherine Judge Memorial Award judging panel, made the presentation after she and her fellow judges heard Elgar’s performance of La Capricieuse Opus 17 before an audience of over 100 people.

Mairéad will receive a bursary of £5000 towards her musical studies and, for the first time in the history of the award, their school CIT Cork School of Music will also receive £1000.

The award, which is now in its ninth year, is presented annually to an exceptional solo classical musician who wishes to pursue a third-level music education. The award was created as a lasting tribute to Catherine Judge, an employee of Bank of Ireland, who passed away in August 2005. Catherine had a great love of music and loved to see young people get opportunities to grow and develop.

Chair of the Judging Panel Professor Fiona Palmer said: “The Catherine Judge Memorial Award is a fantastic opportunity for young musicians to showcase their talent and dedication. I thoroughly enjoy getting to see the wealth of musical talent there is from students across the island of Ireland. On behalf of the judging panel I would like to congratulate Mairéad on her win and wish her all the best with her future studies and career.”

Sean Sheehan, Regional Director, NI Consumer & Small Business, Bank of Ireland UK said: “I would like to thank the nine finalists who took part in today’s event for their outstanding performances; they are all incredibly talented musicians. Congratulations to Mairéad on her winning recital which had us all captivated this afternoon and we look forward to hearing more of her musical success in the future.”