Average debt on Irish farms half the European average 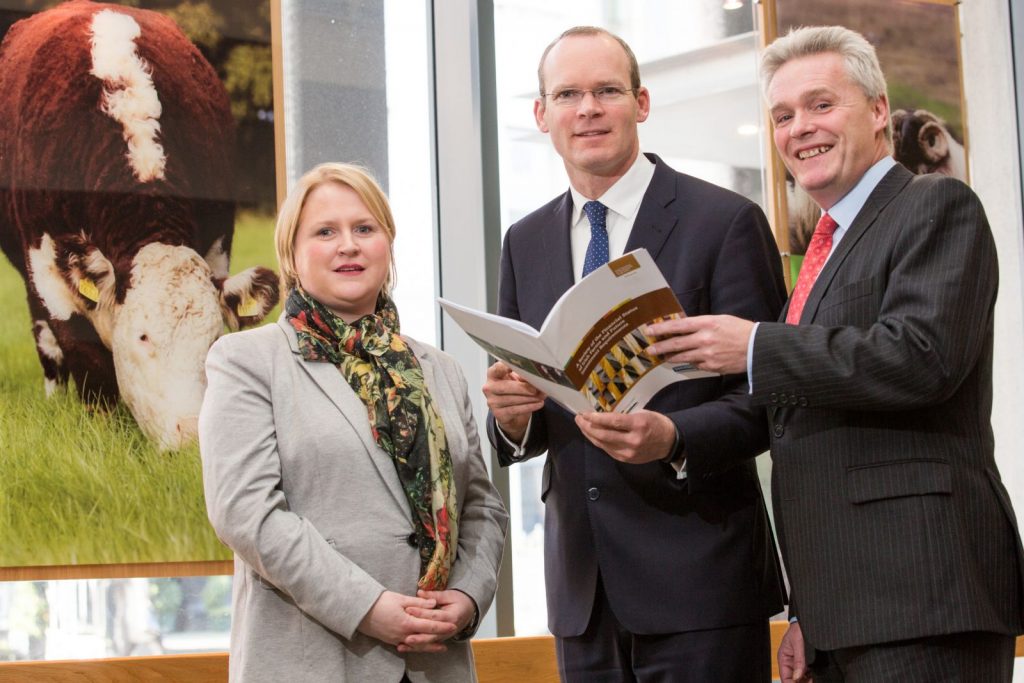 Pictured at the launch of the new Teagasc/Bank of Ireland research on the financial status of Irish farms are Fiona Thorne, Economist with Teagasc, the Minister for Agriculture, Food and the Marine Simon Coveney, T.D., and Mark Cunningham, Director, Bank of Ireland Business Banking.

Wednesday 14 January, 2015: The Minister for Agriculture, Food and the Marine, Simon Coveney, T.D. today launched a new report on the financial status of Irish farms. The research, which was conducted by Teagasc and sponsored by Bank of Ireland, examines the current debt level on Irish farms in comparison to other farms in Europe and also assesses the likely investment on dairy farms following the removal of the milk quota this April.

Rd. Fiona Thorne, economist with Teagasc and one of the authors of the report, said: “Irish farms in general have a sound financial structure with debt to asset levels quite low by international standards. The average debt level on Irish farms is €24,000, which is about half of the European average. Larger dairy farms managed by farmers with higher family farm income and an off-farm income earned by the spouse are the most likely to invest”.

Speaking at the launch Mark Cunningham, Director of Business Banking, Bank of Ireland said: ‘This report highlights the very significant investment requirement for the sector over the coming years. We have ambitious growth plans to grow our presence in the sector and have trebled our team of agricultural managers to support this growth agenda. In 2014, we approved a total of €620m for the sector, an increase of 19%. Of that figure, €135m was for land purchase of some 24,000 acres at an average cost per acre of €9,600.

“We anticipated the significant investment required by the dairy sector post quota abolition and have a €1bn investment fund in place to support dairy expansion. Irish dairy farms have low debt levels relative to our European counterparts and have lower average costs of production, positioning the sector well to grow output and compete on the International export market”.

Speaking at the launch of the report Minister Simon Coveney said:”I welcome the publication of this report. Agriculture is one of the cornerstones of the Irish economic recovery. This report shows that Irish farmers have prudently managed their businesses over recent years. This kind of sound management is no surprise and can both mitigate the worst impacts of price volatility and help to position farmers to invest and expand to exploit the opportunities that will arise from the abolition of milk quotas.”

The study also concluded that investment in the order of €1.5 billion would be required if milk output is to increase by 50 percent over the next 5 years as set out in the Food Harvest 20-20 report. The bulk of this investment will be undertaken by existing dairy farms and it is imperative that such farmers engage in rigorous financial planning in order to protect themselves in times of low milk prices.

The Teagasc/Bank of Ireland report also looked at the pig sector and concluded that the Irish pig industry continues to improve its efficiency levels despite tight financial margins. But if the ambitious Food Harvest 20-20 pig sector targets were to be met then further capital investment will be required from financial institutions. The most immediate significant investment requirement is a reduction in the merchant feed credit which currently inflates feed prices and the cost of pig production. If merchant credit was replaced by bank financing this would decrease the cost of production and allow the Irish pig industry to become more internationally competitive.