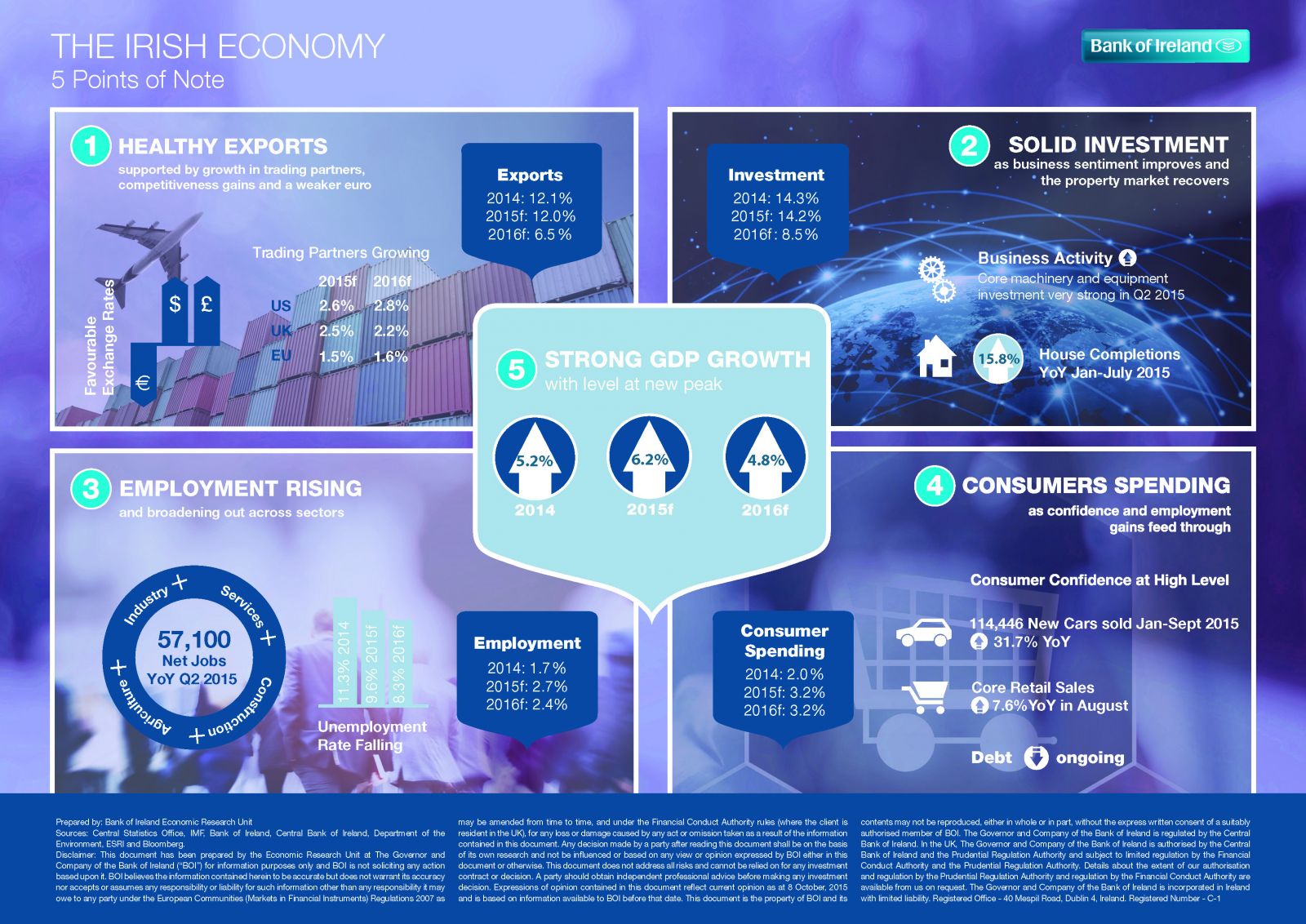 The Bank of Ireland Chief Economist, Dr Loretta O’Sullivan, has revised her 2015 headline GDP and GNP forecasts upwards by just under one percentage point to 6.2% and 5.8% respectively. The outlook for 2016 also remains bright with the GDP forecast for next year unchanged at a still strong 4.8%.

The Quarterly Economic Outlook points to strong consumer spending, with car sales in the first 9 months of 2015, up 31.7% on the same period in 2014 and retail sales (excluding cars) also strong at 7.6% year-on-year in August. Further employment and income gains will support spending which is forecast to increase by 3.2% both this year and next.

Recent data, including healthy order books, suggest that exports will continue to perform well in the second half of the year. Growth of 12.0% is now forecast for this year (9.0% in Bank of Ireland’s previous outlook), followed by a more modest but still healthy 6.5% next year. Looking ahead, the improving domestic economy is expected to support employment gains in the region of 2.7% this year and 2.4% in 2016. The unemployment rate is forecast to fall to close to 9% by year end and approximately 8% by the end of next year.

Activity in the residential housing sector continues apace with transactions up 30% in the first 7 months of the year, while the volume of mortgages for house purchase increased by almost 44% year-on-year in the first half. The annual pace of house price gains has eased since the turn of the year, possibly impacted in part by the Central Bank’s new macro-prudential rules. However, demand remains strong with higher employment, incomes and demographics continuing to support activity.

Discussing the latest Quarterly Outlook, Dr Loretta O’Sullivan, Chief Economist, Bank of Ireland said: “The outlook for 2016 remains bright, and we are leaving our GDP forecast for next year unchanged at a strong 4.8%. The public finances are in good shape ahead of Budget 2016, which the Government has signalled will provide for a tax reduction/spending increase package of between €1.2 and €1.5 billion. With unemployment falling and improving consumer spending – which has risen for 6 consecutive quarters – there are further positive signals of continued growth.”