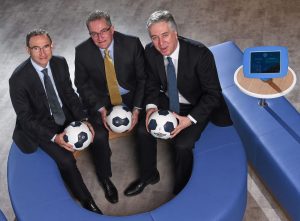 Bank of Ireland has today announced a four-year sponsorship contract with the FAI which will run up to the end of 2018.

The sponsorship of the Schools Cup Competitions will help to develop the game at all levels as the Bank will support boys and girls schools soccer in post-primary schools around the country. Bank of Ireland will deliver 80 coaching sessions for schools and will provide coaching equipment to all the schools that participate. Further support will be provided to school coaches each year as the Bank will host elite coaching conferences. Over the four years 2,000 students from secondary schools across the four provinces will be invited to watch the Irish Team train and to attend international home fixtures.

John Keegan, Director of Distribution Channels at Bank of Ireland, said “We are very pleased to become both the Official Financial Services Partner to the FAI and sponsor of the Post-Primary Schools Cup Competitions. We already support schools with strong sporting cultures in a variety of ways, and this new sponsorship is further confirmation of our strong belief in the positive role that sport plays, in the lives of students and young people across the country.

“Soccer is played in every part of Ireland. Bank of Ireland has 250 branches across the country, and I look forward to using our branch footprint to maximise the impact of this new sponsorship in these communities. We also want to support the development of soccer and aspiring young talent at all levels. This is a very exciting time with the Euro Qualifiers already well underway and the World Cup just around the corner and we are delighted with our new association with FAI.”

FAI CEO John Delaney said, ‘We are delighted to welcome Bank of Ireland on board as sponsors, in what is a very exciting year for the association. They have a proven track record of supporting Irish sport at all levels, and have a strong presence in communities throughout the country. Coaching is key to the development of grassroots football, and this sponsorship will place an emphasis on educating coaches to help nurture and develop talent. We are very happy to have Bank of Ireland as our Official Financial Services Partner, and are very excited about their involvement in the Post-Primary Schools Cup Competitions”.