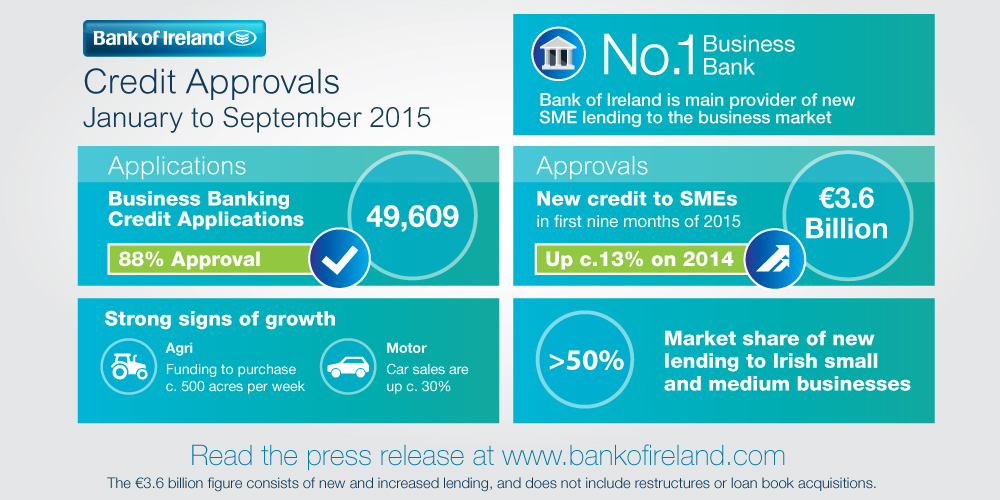 Wednesday, October 28th: Bank of Ireland has announced new credit approvals for Irish businesses to the end of September 2015 of €3.6 billion, up c.13% on the same period last year. The €3.6 billion figure consists of new and increased lending, and does not include restructures or loan book acquisitions. The agri, motor and retail sectors are continuing to grow, with the abolition of milk quotas continuing to influence carefully considered agri expansion and with improvements in construction being a contributor to commercial vehicle lending.

Just under 50,000 applications for new or increased credit were received by the Bank to the end of September from Irish businesses, a 9% increase when compared with last year. Bank of Ireland approved c.88% of these credit applications. Bank of Ireland continues to provide more than half of all new lending to Irish small and medium businesses.

Strong performance continues in the motor sector and the rise in new car sales last year signalled an improvement in confidence which has continued into this year. Car sales for the first 9 months of the year are up c 30% on the same period of 2014 and are on track to reach 120,000 for the full year. Significantly, the light commercial market increased by approximately 49% on the same period last year. This strong growth is paralleled by an increase in Bank of Ireland’s motor approvals for both SMEs and the personal motor market.

Discussing the credit approval data, Mark Cunningham, Director of Business Banking, said: “The continued recovery of the Irish economy is evident through our Business and Agri lending data, with both applications and approvals up on last year. A number of economic indicators point to sustained improvement, including higher consumer spending, increased car and van sales, and an annualised expansion in retail sales. Recent data, including healthy order books, suggest that exports will also perform well in the second half of the year. Given these conditions and outlook, Bank of Ireland’s credit approvals should increase in line with demand in Q4, which historically has been a busy period for lending.

“Increased levels of activity in the agri sector have been primarily driven by land purchase and farm development as our customers make a carefully considered response to medium to long term growth opportunities afforded by the abolition of milk quotas – and we continue to approve funding to purchase c. 500 acres of land per week.

“There has also been a significant increase in lending for the purchase of commercial vehicles, indicating amongst other things that those in construction and related trades are starting to see a renewed pipeline of activity.

“Bank of Ireland is also supporting local business through its Enterprise Town and Enterprise Week initiatives, and we are seeing first-hand a renewed sense of well-grounded confidence across various sectors”, concluded Mark Cunningham.

Bank of Ireland’s National Enterprise Week will run from 13th to 20th November on the theme of ‘Scaling Your Business’ with a series of events including in Dublin, Sligo and Tralee.