Shane Lowry tees up for Bank of Ireland 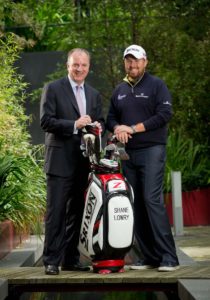 Bank of Ireland today (Tuesday 17 June 2014) announced that it has signed Irish professional golfer, Shane Lowry in a sponsorship deal, which runs to the end of December 2016.  The announcement was made at a press conference for the Irish Open in Fota Island Golf Club, Cork where the former Irish Open Champion will compete over the coming week.

Shane will represent Bank of Ireland both as a brand ambassador in Ireland and as he competes across the globe in the years ahead.  He will sport the Bank’s branding on the left chest of his golf apparel in addition to hosting a number of corporate events for the Bank each year.

Commenting Tom Hayes, Chief Executive, Bank of Ireland Corporate Banking said:  “We are delighted to announce our sponsorship of Shane today. As Ireland’s No 1 Corporate Bank we are committed to supporting Irish talent at home and abroad. Shane’s ambition to compete at the highest level on the global professional golf circuit aligns with our track record of supporting our customers to fulfil their business ambitions in Ireland and across international markets.  We wish Shane continued success, in particular at the Irish Open this week and we look forward to a great partnership with one of Ireland’s brightest sporting talents”.

Offaly born Shane Lowry (27) said:  “I am delighted to have the support of such a strong Irish brand as Bank of Ireland. They have a long tradition of supporting Irish sport and as a proud Irishman I am honoured to join their team.  I am very much looking forward to representing Bank of Ireland as I strive to fulfil my ambitions of rising up the World Rankings and competing in Major Championships over the coming years.”