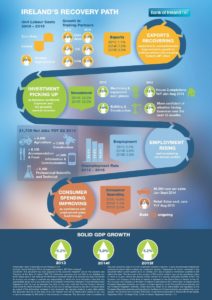 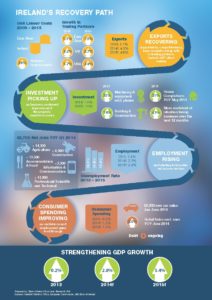 Tuesday, July 29th – Bank of Ireland’s latest Outlook for the Irish economy has forecast a strengthening of the   recovery, with GDP growth revised upwards for this year and next and continued momentum on the jobs creation front.

2014 had a strong start with GDP and GNP recording solid growth, further job gains, a sharp rebound in exports, a pick-up in investment, and a slight increase in consumer spending. Prospects for the second quarter also look good, with positive signals from export orders books, industrial production data and retail sales. More generally, improving external demand, favourable exchange rate movements, and the waning impact of the patent cliff are expected to underpin export growth, with domestic activity and the continuing recovery in the property market providing additional support to investment. As confidence and employment gains feed through, consumer spending is also set to firm.

“The recovery path that we are witnessing is in keeping with what we would expect for a small open economy like Ireland. The starting point is a rebound in exports, which leads to a pick-up in investment. This supports employment growth which in turn, and in time, underpins an improvement in consumer spending.  A broad range of indicators point to this recovery path and if we look at the Irish economy through this lens, it is clear that it has been in recovery mode for some time now.

“Taking the first quarter data and more recent information into account, we have revised upwards our forecasts for GDP growth for this year and next, to 2.8% and 3.4% respectively.  As economic activity strengthens, the unemployment rate – which is already trending down – is projected to fall further and to average 10.4% in 2015.”