The Hunt is on for Junk Kouture’s Young Designers 2015

The Hunt is on for Junk Kouture’s Young Designers 2015 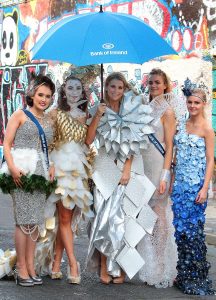 Today sees the call out for entrants for the prestigious Bank of Ireland Junk Kouture Recycling Fashion Competition 2015 in association with Repak. The All-Ireland secondary school competition was launched today by brand new judge; Model and TV presenter Vogue Williams who was joined by a selection of finalists from last year’s competition. The five entries on show today made it to last year’s Grand Final in the O2, giving future entrants a taster of what to expect from Junk Kouture 2015.

Commenting on the launch, Bank of Ireland Youth Marketing Manager, Conor Mc Glynn said “We’re a dedicated supporter of secondary school initiatives and absolutely delighted to be sponsoring Junk Kouture for the third year running.  The competition has a unique way of empowering young people to hone their creative skills and meet others with similar interests. For Bank of Ireland, it’s a meaningful opportunity for us to engage with our school partners and customers and celebrate some of the most bold and innovative young people in the country.”

The recycled fashion competition, now in its fifth year, is open to all secondary school students in both the Republic and Northern Ireland. As with previous years there will be four regional heats; The Helix, Dublin 6th March 2015, Millenium Forum, Derry/Londonderry 9th March 2015, The Royal Theatre, Castlebar 11th March 2015 and University Concert Hall, Limerick, 13th March. The Grand Final featuring the top 80 dresses will take place in the 3Arena, Dublin on 24th April 2015.

With some great prizes on offer, the clock is now ticking for students and teachers a like to get creative. Full details can be found below.