Bank of Ireland names its Sponsor for a Day winners! 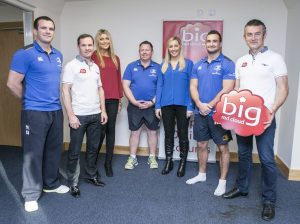 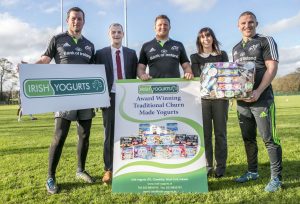 Bank of Ireland today (Wednesday, 17 December 2014) announced that Big Red Cloud is the Leinster winner and Irish Yogurts is the Munster winner of its ‘Sponsor for a Day’ competition. This is the second year of the competition, which was open to businesses across Ireland. The prize includes the right to have their company logos displayed on the players’ jerseys for a European Rugby Champions Cup match in January. Big Red Cloud will sponsor the Leinster rugby team during the Leinster v Castres game on Friday 16 January 2015 and Irish Yogurts will sponsor the Munster rugby team for the Munster v Sale Sharks match on 25 January at Thomond Park, Limerick.  Both games will be broadcast live on SKY. The total value of the prize is c. €50,000.

Big Red Cloud is a supplier of easy to use online accounting software for small businesses. The company has been in existence since 1993 and over 35,000 businesses are using its system. Big Red Cloud also runs an Elevate Programme which provides the necessary skills for entrepreneurs to run their own business.  Marc O’Dwyer is the CEO at Big Red Cloud and is a diehard Leinster rugby fan. Both Marc and his father played for Leinster with his father captaining the side while Marc played for the province on the U16s and U20s teams.

Commenting on the win Marc O’Dwyer from Big Red Cloud said “It is a dream come true that my company logo will be on the Leinster rugby jersey. The thought of seeing the Big Red Cloud logo displayed front and centre on the jersey my dad and I proudly wore will be an amazing highlight in a remarkable relationship with the Leinster rugby team. This is a fantastic opportunity for us to build brand awareness for the company and I am delighted that Bank of Ireland has given us this chance”.

Irish Yogurts was established in 1994 by Diarmuid O’Sullivan with the aim of producing traditional churn made yogurt. The company is based in Clonakilty in West Cork and employees over 160 people.  Irish Yogurts make 37 different products which are distributed both in Ireland and across Europe. The company is currently building a new factory which will increase the capacity and manufacturing capabilities for the company.

Diarmuid O’Sullivan from Irish Yogurts said “We are delighted to win the opportunity to sponsor the Munster rugby team. It will be a huge honour for us all in Irish Yogurts to see our company logo on the Munster jersey and around the stadium at Thomond Park. We have been steadily growing our brand since we started the company both in Ireland and across Europe and winning this competition will enable us to showcase our brand to a wide international audience. Initiatives like ‘Sponsor for a Day’ are invaluable to small companies like ours and I commend Bank of Ireland for giving us this unique opportunity to help us grow our brand awareness”.

Mark Cunningham, Director of Business Banking, at Bank of Ireland said “Congratulations to the teams at Big Red Cloud and Irish Yogurts on winning our ‘Sponsor for a Day’ competitions. I am delighted to see the prizes go to two fantastic Irish companies. ‘Sponsor for a Day’ is about giving companies the chance to gain exposure for their brand from which I am sure both Big Red Cloud and Irish Yogurts will greatly benefit. Again this year we received a high level of entries from companies across all industries, showing that entrepreneurial Ireland is alive and thriving.

“We are delighted to support our business customers through initiatives such as our ‘Sponsor for a Day’ competition. At Bank of Ireland we are the No 1 Bank for business and supporting Ireland’s entrepreneurs is a key objective for us. Aside from the financial support we offer businesses, we have a number of initiatives in place to help businesses to grow and develop including our bi-annual National Enterprise Weeks and our partnerships with Google, Facebook and Twitter. I encourage both customers of the Bank and non-customers to call into their local branch to see how we can help to grow and develop their business,” concluded Mark Cunningham.

The full ‘Sponsor for a Day’ prize includes – the winners company logo on the front of the jerseys; pitch signage, corporate hospitality for ten guests; match programme advert; photographs with the team, promotion for your business from Bank of Ireland, Leinster Rugby and Independent News and Media for the winners. The total prize is valued at €50,000.