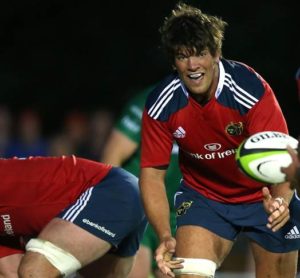 Friday 5 September 2014: Bank of Ireland is integrating its social media presence across its rugby sponsorship with the addition of the Twitter handle @bankofireland to Leinster Rugby and Munster Rugby team shorts. The move is a first for a sponsor in Ireland and the Bank’s Twitter handle can be seen on both teams’ new rugby kits, in time for the new rugby season which starts on Friday 5th September with the first Guinness Pro 12 game. The Bank is aiming to build its social media following and drive fan engagement with the initiative.

Bank of Ireland’s Twitter handle was born in September 2013 and now has over 17,300 followers. Followers receive news as well as rugby sponsorship announcements, including exclusive Twitter competitions and photos from training sessions. The Bank recently live-tweeted the sponsor’s leg of the Munster Race #MunRace14, where Munster rugby players were challenged with selling Blaas in Waterford to raise money for local charities. Their efforts were documented through the Twitter hashtag #MunRace, which proved to be an engaging grass-roots initiative for fans to engage players via Twitter.