Voting open to the public on www.independent.ie/sponsorforaday 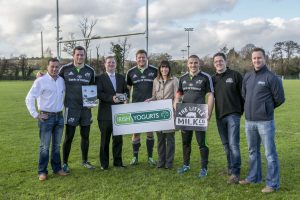 Issued Monday, 24 November 2014, Bank of Ireland is delighted to announce that five companies in Leinster and five companies in Munster have been shortlisted for its ‘Sponsor for a Day’ competition. The competition offers businesses throughout Ireland the opportunity to sponsor the Munster and Leinster rugby teams for a day, by winning the right to have their company logo displayed on the players’ jerseys, during high profile European Rugby Champions Cup matches in front of a large live and TV audience. The competition is valued at €50,000, with one lucky winner from Munster and Leinster.

The full prize includes – the winners company logo on the front of the jerseys; pitch signage, corporate hospitality for ten guests; match programme advert; photographs with the team, promotion for your business from Bank of Ireland and Munster/ Leinster Rugby and Independent News and Media through press and media for all shortlisted companies and winners. The selected games will take place in January 2015 and will be a Leinster v Castres match on 16 January at the RDS, Dublin and a Munster v Sale Sharks match on 25 January at Thomond Park, Limerick. Both games will be broadcast live on SKY.

Commenting on the competition, Mark Cunningham, Director of Business Banking, at Bank of Ireland said “We received very strong entries again this year for our ‘Sponsor for a Day’ competition and the ten shortlisted companies are examples of the hard working and innovative businesses operating throughout Ireland. The competition is a fantastic opportunity for businesses to increase their brand awareness by sponsoring such high profile teams like Leinster and Munster for European Rugby Champions Cup matches. Feedback from last year’s winners was that the exposure received from sponsoring the teams greatly helped increase the profile of their companies with one winner stating they increase sales by 15%.

“Sponsor for a Day is about giving businesses an opportunity they would never normally be able to organise themselves – to have their company name on the players’ jersey and on pitch signage for a match that is broadcast live to an international audience. As Ireland’s No.1 business bank we are committed to supporting Ireland’s SMEs, to help them increase and grow their businesses. I wish all the shortlisted companies the very best of luck and I encourage everyone to get involved and vote for their chosen company to sponsor their team”.

Who: The Sponsor for a Day competition is open to all businesses in Ireland.

To Vote: Log on to independent.ie/sponsorforaday and vote for the business you want to sponsor the Munster and Leinster Rugby teams.

Glenmar Shellfish Ltd is a fishing group that manage the landings of over 70 fishing vessels, supporting coastal communities in the South, West and East of the country and employs 100 people. Over the last few years Glenmar Shellfish Ltd has started operations in South Africa. Mel is tasked with company strategy, growth and team building, to take Glenmar Shellfish into the future.

Established in 1994 by Diarmuid O’Sullivan, Irish Yogurts’ aim was to produce traditional churn made yogurt to be supplied to retail outlets nationwide. The company has grown from a small one person artisan operation in 1994 to an award winning, highly successful internationally recognized food company located in Clonakilty, West Cork operating from two sites in the town employing over 160 people locally.

The yogurt is made in the churn the traditional way, fresh milk, live yogurt cultures and real fruit are used. The milk and cream comes from local family farms in West Cork. The churn process is an artisan method and at Irish Yogurts they are famous for producing great tasting artisan quality products. The Irish Yogurt brand comprises of 37 different products available nationwide in all major retailers including Dunnes Stores, SuperValu, Centra and Tesco. The Irish Yogurts brand is also available in Tesco, Sainsbury’s and Morrisons in the UK.

Established in 2003 by Paul Henry, Pinnacle Homes Ltd, offers an extensive range of building services including residential homes and extensions as well as educational, commercial and building maintenance. They take pride in their safety record and strict adherence to health and safety laws and building regulations. From inception, their mission has been to build a relationship of trust between Pinnacle and customer for every project regardless of size. They strongly believe that integrity, commitment and attention to detail provide the foundation for a successful project. Catering to the concerns of the customers as well as keeping them updated on progress to date is our standard operating procedure for all projects. By following these core principles, Pinnacle Homes has continued to grow and become an established player in the construction industry in a difficult economic climate. Paul is a keen sports fan and a proud holder of two ten year tickets to Thomond Park

Since 2012 Conor has been applying his business development skills to the Little Milk Company. Under his leadership the co-operative of organic dairy farmers has gone on to win over 20 cheese awards, sell their products in over 200 stores across Ireland and export their products to Germany, France, Belgium, Holland, Australia and the UK. This year The Little Milk Company also won the Bord Bia Exporter of the Year 2014.

From its beginnings in 2009, Truly Irish Country Foods has firmly established itself as a premium quality brand. The company was set up by a group of pig farmers who were dissatisfied with the quality of pork on the supermarket shelves and the high levels of imports that were packaged as Irish. 85 pig farmer shareholders are based all over Ireland. Their motto is simple – our name is our guarantee.

The farmer’s brand has stressed the high meat content and natural quality of their Bord Bia certified bacon and pork products, which are all DNA traceable back to local farms. What makes Truly Irish different is they absolutely refuse to compromise quality for profit. Truly Irish are the fastest growing pork brand in Ireland and can be found in all major retailers nationwide. By buying Truly Irish, consumers are helping to protect the future of 8,000 Irish jobs in the Irish pig industry.

Big Red Cloud is a leading supplier of easy-to-use online accounting for small businesses. Bookkeeping and preparing the accounts does not come easy to many business owners and they have taken it upon themselves to produce the necessary solution to help, nurture and grow entrepreneur’s confidence and knowledge so that they can master this necessary business tasks.

To help business owners they in turn established the Elevate programme; it is their version of the Leinster Academy: it provides the tools and resources necessary for small businesses to understand and master the various aspects of running a small business. It sets them up well and positions them nicely to step up to the next level.

Over 35,000 businesses have already made the move and are up and running with Big Red Cloud’s online account’s software.

Stephen Quinn is the CEO of Jobbio which is an Irish technology business at the forefront of online and mobile recruitment. It is a simple recruiting platform for both talent and brands. Backed by Enterprise Ireland as a High Potential Start-up they are using technology to challenge the old world recruitment model of job boards, recruiters and applicant tracking systems. With over 450+ companies including Irish and international companies and 90K users already signed up to the platform they are fast becoming the new way to hire and be hired.

Based just a short distance from one of Ireland’s most celebrated fishing villages, Kilmore Quay Fine Foods is a family run business where quality truly counts. Mark O’Connor and John Kenny realised that there was a gap in the market for convenient quality focused Irish seafood. They were tired of seeing large foreign brands dominating the shelves of the local supermarkets with products that were often defrosted and contained more bread crumbs than fish. From day one, they’ve been working directly with local fishermen to source the very best of Irish seafood. Their small-scale approach to production is genuinely sustainable and offers absolute traceability from tide to table. What’s more, unlike many larger businesses, they still hand fillet and hand prepare their seafood, for that added traditional touch.

Today, Kilmore Quay combines the knowledge and heritage of a distinguished family run brand, with the outstanding quality and reliability of local fresh seafood. With that in mind they developed their product range including, seafood sausages, haddock goujons, and smoked salmon. All their products are gluten free, low in fat and high in Omega 3. Their products are available in Dunnes Stores, Supervalu and Tesco stores throughout Ireland.

Nobó is a young Dublin based food company dedicated to creating the world’s finest dairy-free, healthy, and supremely delicious foods. It was founded by Brian and Rachel Nolan, in the summer of 2012. Their first product ‘Frozen Goodness’, an award winning dairy free alternative to ice cream, was launched into the Irish market 11 months ago and is now available across the country. It is the world’s first ice cream alternative made from avocado and coconut milk, and sweetened with pure honey. Their ice cream alternative is handmade in small batches in County Wicklow.

Radical Oats was founded in 2013 by Tony and Miriam Cox-Monahan. The company’s first product, Radical Oats, is a low GI healthy snack, which combines oats and probiotic yoghurt in a convenient, chilled format. All ingredients are Irish and the product is made in Ireland.

A very active husband and four teenagers prompted Miriam to develop a recipe using Irish oats and other natural Irish ingredients that would keep hunger at bay for a very long time. It is an entirely new concept in the way oats are currently consumed. Using all Irish ingredients, Radical Oats provides slow release energy in a convenient format. In October 2012 Radical Oats won the title ‘Best New Food Producer’ and earlier this year Eamonn Quinn took a 20% equity stake in the company following an appearance on Dragons’ Den by Miriam and daughter Tabitha.The exposure led to significant interest from retailers and Radical Oats is now listed nationwide with Tesco, Super Valu, Dunnes Stores, Centra, Spar, Applegreen and Independent retailers. It is also listed with Pallas Foods for the foodservice industry.

The company is now planning to increase the range of products both in variety and size and expand into external markets. The company currently employs 3 staff (2 part-time) in addition to the directors. The plan is to grow staff quickly in Ireland by providing direct employment and indirect (outsourcing partners) as production increases in the coming months.

The business is located in the Hilltop Business Centre in Raheny. Grant aid by Local Enterprise Office and Enterprise Ireland and support by Bord Bia has had a significant impact on the development of Radical Oats and social media and website have boosted the awareness of the brand.