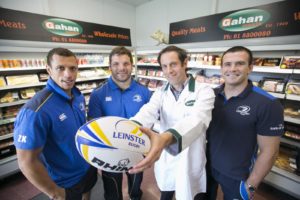 Issued Tuesday, 30th September, 2014.  Bank of Ireland is once again opening up its sponsorships of the Munster and Leinster rugby teams to businesses throughout Ireland to compete in its second ‘Sponsor for a Day’ competition and win the right to have their company logo displayed on the Munster and Leinster players’ jerseys during a high profile European Rugby Champions Cup match in front of a large live and TV audience.

The full prize includes – the winners company logo on the front of the jerseys; pitch signage; corporate hospitality for ten guests; match programme advert; photographs with the team; promotion for your business from Bank of Ireland and Munster/ Leinster Rugby and Independent News and Media through press and media for all shortlisted companies and winners. The selected games will take place in January 2015 and will be a Leinster match at the RDS, Dublin and a Munster match at Thomond Park, Limerick.  Both games will be broadcast live on SKY.

Companies can enter the competition via www.independent.ie/sponsorforaday from today until the closing date of 10 November, 2014.  A shortlist of five Munster and five Leinster based companies will be announced by the end of November, at which point the competition will be opened to a public vote on www.independent.ie/sponsorforaday. The voting will close on 15 December and the winners of both the Munster and Leinster prizes will be announced on 17 December.  Participants and voters can also follow the campaign on Twitter  #sponsorforaday.

Commenting on the competition, Gerry Prizeman, Bank of Ireland said: “This is a wonderful branding and profiling opportunity for two lucky business customers that should be of enormous value to their business.  The two winners from last year’s highly successful inaugural competition were delighted with the whole experience and valued not only the experience of the company logo on match day jerseys but also the increased profile and marketing opportunities that the competition brought and indeed the resultant positive impact that it had on their business.

“The competition is open to all businesses in Ireland, regardless of whether they are Bank of Ireland customers or not.  We are delighted to make this opportunity available to help drive support for business customers within the context of the Bank recognising its key role in supporting and building momentum for businesses nationwide.  We are committed to supporting the SME market, representing as it does a core enabler of restoring the economy to full health. We actively encourage both our customers and non-customers to come and talk to us to see how we can help develop their business.”

This is the second year of the Bank of Ireland ‘Sponsor for a Day’ competition.  Last year’s winners were Gahan Meats in Leinster and Ryan Stoves in Munster.  Speaking about the experience, Nigel Gahan, Gahan Meats, said, ‘To see our family name on the famous Leinster jersey for a crunch game live on Sky Sports was amazing.  We saw a big surge in sales following the event and we achieved a record growth of 15%.  Winning the competition helped our business grow immensely, allowing us to promote our business on a scale that we didn’t have the budget to do, and giving us the impetus to do things such as setting up an new website, creating a Twitter profile, and developing a new brochure’.

To enter, participants have to answer a simple question: ‘Name one rugby province that Bank of Ireland sponsor?’ and a tiebreaker: ‘Tell us why your business should be on the front of the Leinster/Munster jersey?’ (in less than 200 words). Entries must be submitted by 10  November 2013.