Leinster shows its Bród with their cúpla focal 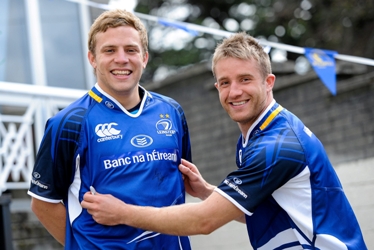 Luke Fitzgerald and Ian Madigan shared cúpla focal as they donned their new Banc na hÉireann jerseys to show Leinster Rugby’s support for Bank of Ireland’s participation in the Bród campaign which aims to encourage use of the Irish language.  The Bank has played a supporting role in the RTÉ series – Bernard Dunne’s Bród Club (Bernard Dunne’s Pride Club) and celebrated the Irish language with a series of Fáilte Fridays in their branches nationwide.

Join Bank of Ireland and Leinster Rugby by showing your bród and participate in this great campaign. Simply attempt to use whatever Irish you can and sign up today to be one of the céad míle members of the Bród Club on www.rte.ie/brodclub.