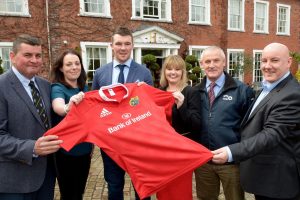 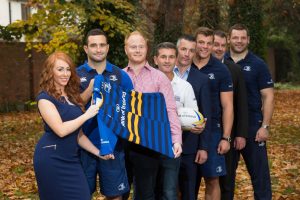 Issued Sunday, 8 November 2015, Bank of Ireland is delighted to announce that five companies in Munster and five companies in Leinster have been shortlisted for its ‘Sponsor for a Day’ competition. The competition offers SMEs throughout Ireland the opportunity to sponsor the Munster and Leinster rugby teams for a day, by winning the right to have their company logo displayed on the players’ jerseys, during high profile European Rugby Champions Cup matches in front of live and TV audiences. The competition is valued at €50,000, with one lucky company winning from Munster and one from Leinster.

The full prize includes – the winners company logo on the front of the players jerseys; pitch signage, corporate hospitality for ten guests; match programme advert; photographs with the team, promotion for the winning businesses from Bank of Ireland, Munster and Leinster Rugby and RTE Radio One on the Ray D’Arcy Show. The selected games will take place over the third weekend in January 2016 when Leinster take on Bath in the RDS in Dublin and when Munster play Stade Francais at Thomond Park in Limerick.

The panel of judges who selected the ten shortlisted companies include: Declan Galvin, Head of Small Business at Bank of Ireland, Jamie Heaslip from Leinster Rugby and Peter O’Mahony from Munster Rugby.

The five shortlisted companies competing to sponsor the Munster Rugby team are RollerJam Roller Skate Rinks based in Cork and Limerick, Skelligs Chocolate from Ballinskelligs in Kerry, Roche’s Feed from Limerick, O’Neill Oil from Youghal in Cork and CelgenTek Limited from Shannon in Clare.

The five companies shortlisted to sponsor the Leinster Rugby team are Pure Bred Gluten Free from Tullamore in Offaly, Adam & Friends from Dundrum in Dublin, Laundrie from Grand Canal Square in Dublin, Acutrace from Clondalkin in Dublin and Mr Jeffares Blackcurrants from Drinagh in Wexford.

Commenting on the competition, Declan Galvin, Head of Small Business at Bank of Ireland said “The calibre of companies that entered the competition was very strong again this year. We received over 1,200 entries which highlights how relevant this competition is for SMEs. The ten shortlisted companies are examples of the hard working businesses operating throughout Ireland. The competition is a fantastic opportunity for businesses to increase their brand awareness by having their company logo on the jerseys of high profile teams like Leinster and Munster Rugby for European Rugby Champions Cup matches. Previous winners have told us that winning our ‘Sponsor for a Day ‘competition has had a hugely positive impact on their business and greatly helped increase the profile of their companies.

“As Ireland’s No.1 business bank we are committed to supporting Ireland’s SMEs, to help them increase and grow their businesses. ‘’Sponsor for a Day’ is an ideal way to do this as it gives businesses the opportunity to have their company name on the players’ jersey and on pitch signage for a match that is broadcast live to international audiences. I wish all the shortlisted companies the very best of luck and I encourage everyone to get involved and vote for their chosen company to sponsor their rugby team”.